Mole concept is the method used to express the amount of substance. This has been experimentally proving that one gram atom of any element, as well as one gram molecule of any substance, contains the same amount of entities. The experimentally decided number is found to be 6.022137 × 1023. After the discovery of the mole concept, the problem of finding absolute atomic masses of atoms was solved. It was so because the mole concept helps to count the number of atoms or molecules in a definite amount of the given substance. Let’s learn more about mole concept formulas and examples.

What is a Mole Concept?

Mole concept is known as the method used to express the amount of substance. A mole is defined as the amount of substance containing the same number of different entities (such as atoms, ions, and molecules) as the number of atoms in a sample of pure 12C weighing precisely 12 g. Even a gram of any pure element contains a high amount of atoms. The mole connects a simple macroscopic feature (bulk mass) to a genuinely significant fundamental trait (number of atoms, molecules, etc.). One mole is also defined as the amount of a substance that contains as many entities as there are atoms in exactly 12 g of the 12C isotope. It was found that the mass of one atom of carbon-12 element is equal to 1.992648 × 10-23 g as measured by the mass spectrometer. Since one mole of Carbon-12 atom weighs 12 g, therefore, the number of atoms in it equals 12 g mol-1 / 1.992648 × 1023 g atom-1 = 6.0221367 × 1023 atoms mol-1. The following formula may be used to calculate the number of moles of a chemical in a given pure sample: 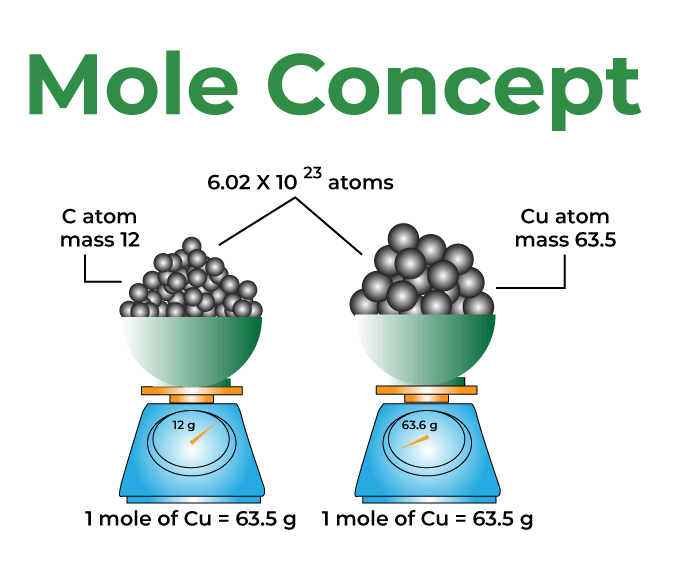 Avogadro’s number is 6.0221367 × 1023. It is named Avogadro’s constant or number in honor of Amedeo Avogadro, a great pioneer in this field. It is denoted by NA. We can also say that 1 mole is the collection of 6.0221367 × 1023 units of a substance. Here, the substance is atoms, molecules, or ions. The number of units that make up a mole has been established empirically to be 6.0221367 × 1023. This is known as the fundamental constant, also known as Avogadro’s number (NA) or the Avogadro constant. This constant is appropriately stated in chemistry using an explicit unit termed per mole. No matter what the given substance may be, one mole of it is always equal to NA.

Mole concept is a method where we identify the mass of chemical substances as per requirement. The entire mole concept revolves around 12 g (0.012 kg) of the 12C isotope. In the SI system, the unit of the fundamental quantity ‘the amount of substance’ is the mole. The symbol of the mole is “mol”. Below are the quantities related to the mole concept: 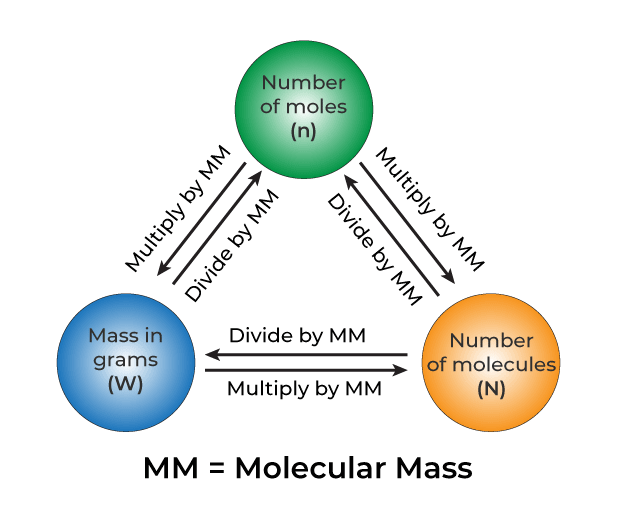 What is Molar Mass?

Molar mass is defined as the total mass of one mole of the substance. It is frequently expressed in terms of ‘grams per mole’ (g/mol). The SI unit for this amount, however, is kg/mol. The following formula may be used to calculate molar mass:

The molar mass of water, for example, is roughly 18.015 g/mol, which is the mass of NA number of water molecules.

How to Find Gram Molecular Mass?

The volume occupied by one gram mole of a substance in a vapor state or gaseous state at STP is called as gram molecular volume. The standard temperature to obtain GMV is 273K, and the standard pressure is 1 atm. The ideal gas equation is utilized to get gram molar volume (GMV = 22.4L).

Relative molecular mass is the molecular weight of an element or molecule; it is expressed as RMM. It is the number of times a single molecule of a substance remains heavier than one-twelfth the mass of a carbon atom (12C).

Following are the formulas for the number of moles, number of atoms and molecules, and the relationship between 1 amu and grams.

Number of Electrons in a Mole of Hydrogen Molecule

One mole of H2 contains 6.023 × 1023 molecules, and each molecule of hydrogen contains two electrons.

Therefore, the molecular mass of the given compound is,

Example 3: Calculate the number of atoms present in 18g of H2O.

Example 4: How many moles are present in 200g of NaOH?

Example 5: Calculate the mass of an atom of oxygen element.

Example 6: Find the ratio of moles of oxygen atoms present in the compounds H2SO4, H2SO3, and SO2.

Example 7: How many moles of hydrogen and oxygen gas are required to produce 13 moles of water?

Now the balanced equation is

Thus we can deduce that 2 moles of hydrogen gas and 1 mole of oxygen gas combine together to form 2 moles of water. We can write the equation as :

Hence, for production of 13 moles of water the required chemical equation would be:

Hence, for production of 13 moles of water we need 13 moles of hydrogen and 6.5 moles of oxygen gas.

Now, formula for acetylene gas is C2H2. It’s structure is H—C≡C—H. Therefore, number of electrons present in 1 molecule of acetylene are 14.

Question 1: What is the Mole concept?

Mole concept is a method where we identify the mass of chemical substances as per requirement. The entire mole concept revolves around 12 g (0.012 kg) of the 12C isotope. In the SI system, the unit of the fundamental quantity ‘amount of substance’ is the mole.

Question 2: What is one mole equal to?

Question 3: How do we use mole fraction?

Mole fraction is defined as the number of single component molecules divided by the total number of molecules. When two reactive elements are combined together, the ratio of the two elements is understood by the mole fraction.

Question 4: What is the importance of the mole concept?

Mole concept provides a standard for measuring certain masses that are universally accepted. It provides a link between several masses and is an efficient way to measure macroscopic properties. For the study of chemistry, understanding mole concept is essential, and knowledge of how mole is applied to masses, number of substances, etc., is important.

It can be said that the partial fraction of each gas is proportional to the mole fraction in a mixture.