Linear Discriminant Analysis or Normal Discriminant Analysis or Discriminant Function Analysis is a dimensionality reduction technique that is commonly used for supervised classification problems. It is used for modelling differences in groups i.e. separating two or more classes. It is used to project the features in higher dimension space into a lower dimension space.
For example, we have two classes and we need to separate them efficiently. Classes can have multiple features. Using only a single feature to classify them may result in some overlapping as shown in the below figure. So, we will keep on increasing the number of features for proper classification.

Example:
Suppose we have two sets of data points belonging to two different classes that we want to classify. As shown in the given 2D graph, when the data points are plotted on the 2D plane, there’s no straight line that can separate the two classes of the data points completely. Hence, in this case, LDA (Linear Discriminant Analysis) is used which reduces the 2D graph into a 1D graph in order to maximize the separability between the two classes. 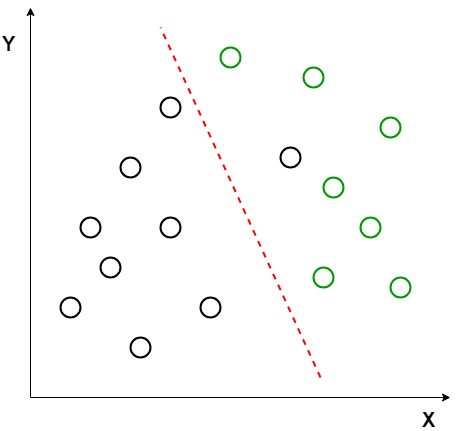 Here, Linear Discriminant Analysis uses both the axes (X and Y) to create a new axis and projects data onto a new axis in a way to maximize the separation of the two categories and hence, reducing the 2D graph into a 1D graph.

Two criteria are used by LDA to create a new axis: 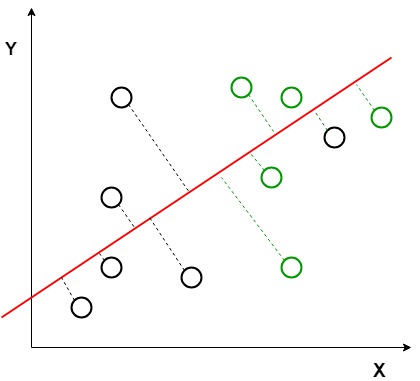 In the above graph, it can be seen that a new axis (in red) is generated and plotted in the 2D graph such that it maximizes the distance between the means of the two classes and minimizes the variation within each class. In simple terms, this newly generated axis increases the separation between the data points of the two classes. After generating this new axis using the above-mentioned criteria, all the data points of the classes are plotted on this new axis and are shown in the figure given below.

But Linear Discriminant Analysis fails when the mean of the distributions are shared, as it becomes impossible for LDA to find a new axis that makes both the classes linearly separable. In such cases, we use non-linear discriminant analysis.

Let’s suppose we have two classes and a d- dimensional samples such as x1, x2 … xn, where:

If xi is the data point, then its projection on the line represented by unit vector v can be written as vTxi

Let’s consider u1 and u2 be the means of samples class c1 and c2 respectively before projection and u1hat denotes the mean of the samples of class after projection and it can be calculated by:

Now, we need to project our data on the line having direction v which maximizes

For maximizing the above equation we need to find a projection vector that maximizes the difference of means of reduces the scatters of both classes. Now, scatter matrix of s1 and s2 of classes c1 and c2 are:

After simplifying the above equation, we get:

Now, we try to simplify the numerator part of J(v)

Now, To maximize the above equation we need to calculate differentiation with respect to v 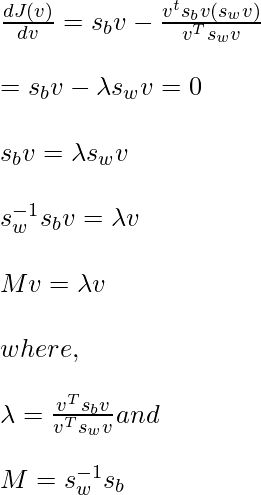 Here, for the maximum value of J(v) we will use the value corresponding to the highest eigenvalue. This will provide us the best solution for LDA. 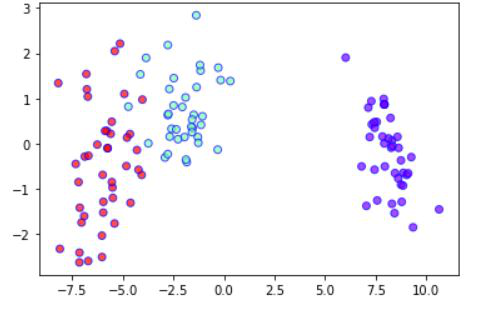