Regression Analysis:
It is a form of predictive modelling technique which investigates the relationship between a dependent (target) and independent variable (s) (predictor).
To establish the possible relationship among different variables, various modes of statistical approaches are implemented, known as regression analysis. Basically, regression analysis sets up an equation to explain the significant relationship between one or more predictors and response variables and also to estimate current observations. Regression model comes under the supervised learning, where we are trying to predict results within a continuous output, meaning that we are trying to map input variables to some continuous function. Predicting prices of a house given the features of the house like size, price etc is one of the common examples of Regression

Types of regression in ML

Need for regression:
If we want to do any sort of data analysis on the given data, we need to establish a proper relationship between the dependent and independent variables to do predictions which forms the basis of our evaluation. And that relationships are given by the regression models and thus they form the core for any data analysis.

Gradient Descent:
Gradient Descent is a very generic optimization algorithm capable of finding optimal solutions to a wide range of problems. The general idea of Gradient Descent is to tweak parameters iteratively in order to minimize a cost function. Here that function is our Loss Function. The loss is the error in our predicted value of m(slope) and c(constant). Our goal is to minimize this error to obtain the most accurate value of m and c.
We will use the Mean Squared Error function to calculate the loss. There are three steps in this function:

Here y is the actual value and y’ is the predicted value. Lets substitute the value of y’:

Now the above equation is minimized using the gradient descent algorithm by partially differentiating it w.r.t m and c.

Then finally we update the values of m and c as follow: 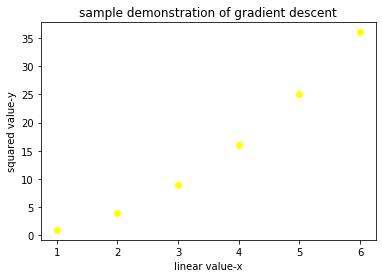 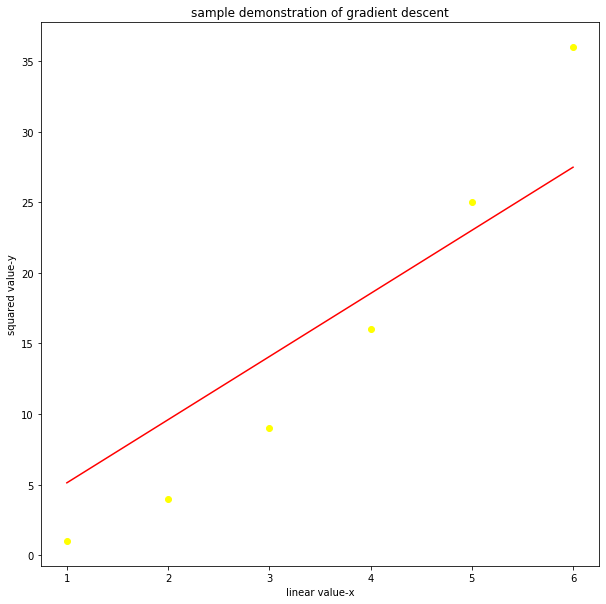