Real-world data tend to be noisy. Noisy data is data with a large amount of additional meaningless information in it called noise. Data cleaning (or data cleansing) routines attempt to smooth out noise while identifying outliers in the data.

There are three data smoothing techniques as follows –

There are basically two types of binning approaches –

How to perform smoothing on the data?

There are three approaches to perform smoothing –

Binning can also be used as a discretization technique. Here discretization refers to the process of converting or partitioning continuous attributes, features or variables to discretized or nominal attributes/features/variables/intervals.
For example, attribute values can be discretized by applying equal-width or equal-frequency binning, and then replacing each bin value by the bin mean or median, as in smoothing by bin means or smoothing by bin medians, respectively. Then the continuous values can be converted to a nominal or discretized value which is same as the value of their corresponding bin. 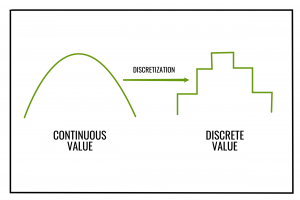