Example: To refer to the cell present in row 2 & column D, cell reference is: D2, where D is column letter & 2 is the row number.

By default, every cell is a relative reference. Example: If you refer to cell D2 in cell F2, you refer to a cell that is 2 columns to the left (F-D = 3) in the same row number 2.

The relative relation for that location will be updated automatically when it is copied to other positions in a worksheet. (Because a relative cell reference defines an offset to another cell – say, 2 columns left within the same row in the example mentioned above). 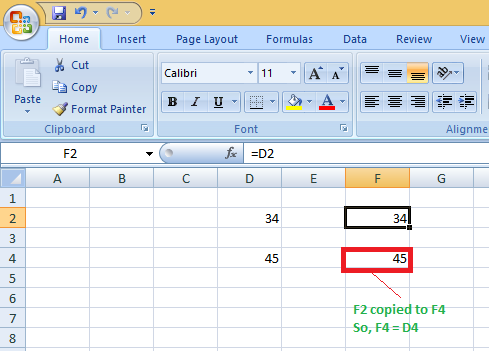 There are times when the cell reference must stay the same when copying or using AutoFill. Using dollar signs, a column and/or row reference can be kept constant. So, to get an absolute reference from a relative, we can use the dollar sign ($) characters.

We use an absolute reference to refer to an actual fixed location on a worksheet whenever copying is done. The reference here is locked such that rows and columns do not shift when copied.

Dollar ($) before row fix the row & before the column fixes the column.

We used $ before the column number, so we are locking the only column here. 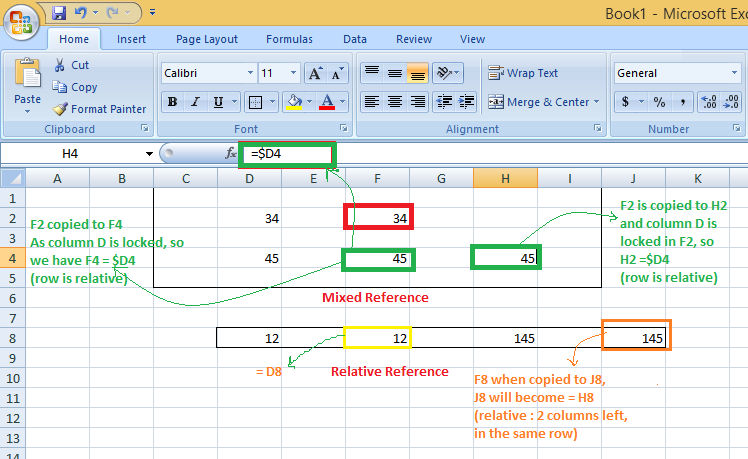 When F2 is copied to H4, then H4 = $D4 because the column is the same here, i.e., column letter D But the row is relative (i.e. the same row in which copying is done). 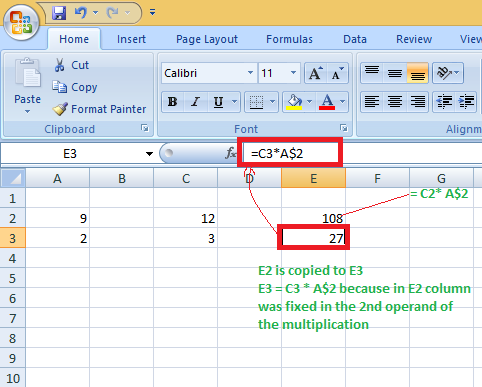 Previous
Group Pivot Table Data in Excel
Next
Positive and Negative Trend Arrows in Excel
Related Articles
1. Editing Excel Macros in Excel
2. Excel VLOOKUP with Dynamic Column Reference
3. Scenario Manager in Excel
4. Excel VBA | count() functions
5. How to Sum Diagonal Cells in a range in Excel?
6. How to Find Duplicates in Excel?
7. How to Use for Each Loop in Excel VBA?
8. Combination Charts in Excel
9. Excel VBA | sum() functions
10. Excel VBA | Average() Functions
Article Contributed By :