As explained in this article, an SQL Injection attack, or an SQLi, is a way of exploiting the underlying vulnerability of an SQL statement by inserting nefarious SQL statements into its entry field for execution. It first made its appearance in 1998, and ever since, it mostly targets retailers and bank accounts. When compounded with other forms of attacks such as DDOS attacks, cross-site scripting (XSS) or DNS hijacking, it can lead to large scale results.
Terminology:

To avoid SQL injection, all input that are to be concatenated in dynamic SQL must be correctly filtered and sanitized.
Anatomy of an SQL attack:
An SQL attack has the following two parts: 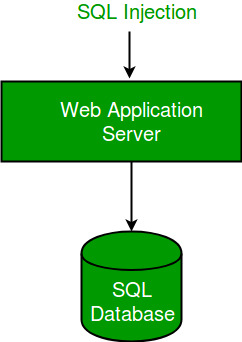 Example1:
Consider the following piece of code for an authentication form written in Java:

Under normal conditions, a user enters his or her userID and password, and this generates the following statement for execution:

A possible SQL injection attack would exploit the password field to generate a boolean expression which would make the expression evaluate to true for all cases. Imagine setting the userID and password fields as

The SQL statement then becomes

The query will return a value because the condition (OR 1=1) is always true. In this way the system has authenticated the user without knowing the username and password.
The vulnerability can be mitigated using a prepared statement to create a parameterized query as follows:

If an attacker attempts to give a value to the userID field that is not a simple integer, then statement.setInt() will throw a SQLException error rather than permitting the query to complete.
Example2:
Consider another type of attack during authentication:

A normal query would be as follows.

The attacker may inject the following into the userName field.

Due to this, the actual query will change to:

This will cause another SQL statement to get appended to the actual statement, causing the user to get added to the Administrator database. The attack can be mitigated by using a prepared statement with a parameterized query as follows.

Example3:
Consider another example of query vulnerability discussed below:

A general query will be:

Consider if the attacker enters the following query into the userName field:

The query will then change to:

This query completely deletes the users table upon its execution. A workaround here, again, is a prepared statement.
How does using a Prepared Statement in Java help?
A prepared statement “sanitizes” the input. This means it makes sure that whatever the user enters is treated as a string literal in SQL and NOT as a part of the SQL query. It may also escape certain characters and detect/remove malicious code. In other languages such as PHP, filter_input or filter_input_array can be used to sanitize the string.
This article is contributed by Anannya Uberoi. If you like GeeksforGeeks and would like to contribute, you can also write an article using write.geeksforgeeks.org or mail your article to review-team@geeksforgeeks.org. See your article appearing on the GeeksforGeeks main page and help other Geeks.
Please write comments if you find anything incorrect, or you want to share more information about the topic discussed above.