Method Overloading with Autoboxing and Widening in Java

Let us go through the basic pre-requisites such as Method Overloading, Autoboxing, and Unboxing. So method overloading in java is based on the number and type of the parameters passed as an argument to the methods. We can not define more than one method with the same name, Order, and type of the arguments. It would be a compiler error. The compiler does not consider the return type while differentiating the overloaded method. But you cannot declare two methods with the same signature and different return types. It will throw a compile-time error. If both methods have the same parameter types, but different return types, then it is not possible.

In Java, there are two types of variables: 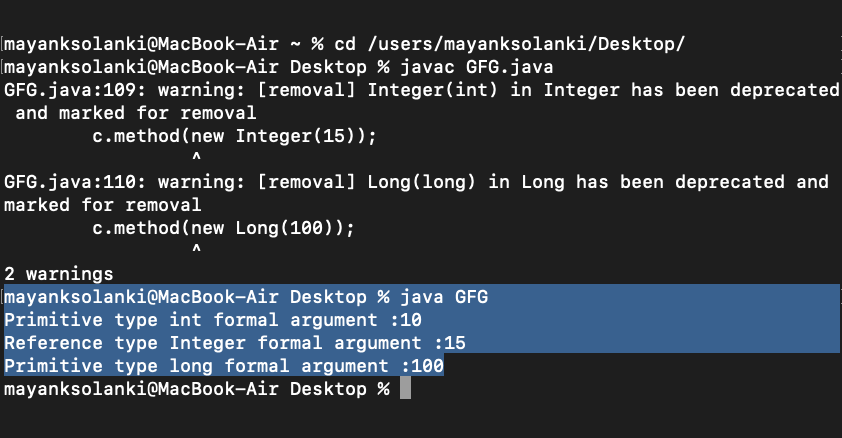 If the compiler fails to find any method corresponding to autoboxing, then it starts searching a method parameter(s) of the widened primitive data type.

In the example below, we are invoking the overloaded method with primitive(int) formal argument that has the same data type as the actual argument’s data type. We are invoking another method with the argument of Long wrapper Object. The compiler starts searching for the method having the same reference type (Long wrapper class). Since there is no method having with parameter of Long wrapper class. So, It searches for a method that can accept the parameter bigger than long primitive data type as an argument. In this case, it finds a method with float primitive data type and invokes it.

Method Overloading with Widening and Boxing Together

Note: Geeks, but boxing followed by Upcasting is acceptable if this is passed to a reference of type Object for which we will be proposing another example as follows:

Note: Widening of primitive type gets more priority over var-args.

This article is contributed by Nitsdheerendra. If you like GeeksforGeeks and would like to contribute, you can also write an article using write.geeksforgeeks.org or mail your article to review-team@geeksforgeeks.org. See your article appearing on the GeeksforGeeks main page and help other Geeks.
Please write comments if you find anything incorrect, or you want to share more information about the topic discussed above.