We are given two sorted arrays. We need to merge these two arrays such that the initial numbers (after complete sorting) are in the first array and the remaining numbers are in the second array. Extra space allowed in O(1).

This task is simple and O(m+n) if we are allowed to use extra space. But it becomes really complicated when extra space is not allowed and doesn’t look possible in less than O(m*n) worst case time.  Though further optimizations are possible
The idea is to begin from last element of ar2[] and search it in ar1[]. If there is a greater element in ar1[], then we move last element of ar1[] to ar2[]. To keep ar1[] and ar2[] sorted, we need to place last element of ar2[] at correct place in ar1[]. We can use Insertion Sort type of insertion for this. 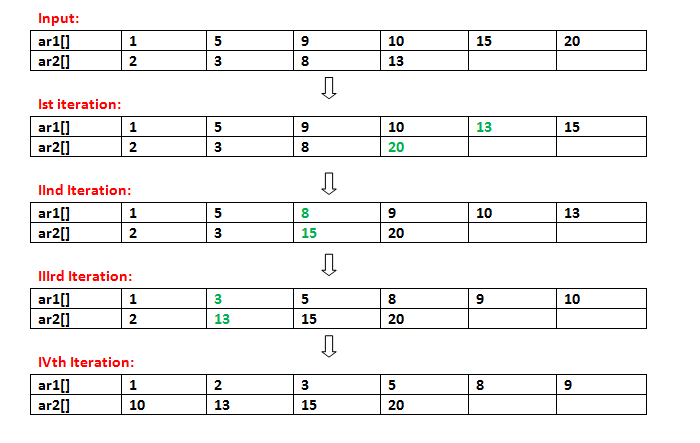 The solution can be further optimized by observing that while traversing the two sorted arrays parallelly, if we encounter the jth second array element is smaller than ith first array element, then jth element is to be included and replace some kth element in the first array. This observation helps us with the following algorithm

Below is the implementation of above algorithm

Time Complexity: The time complexity while traversing the arrays in while loop is O(n+m) in worst case and sorting is O(nlog(n) + mlog(m)). So overall time complexity of the code becomes O((n+m)log(n+m)).

Space Complexity: As the function doesn’t use any extra array for any operations, the space complexity is O(1).

Related Articles :
Merge two sorted arrays
Merge k sorted arrays | Set 1
Thanks to Shubham Chauhan for suggesting 1st solution and Himanshu Kaushik for the 2nd solution. Please write comments if you find anything incorrect, or you want to share more information about the topic discussed above