Measuring the Rate of Motion

We use general things around us that are moving, like if we see around us, monitor air moving around us, like we have clocks with the hands moving, we all know that day and night is caused because of motion of Earth around the Sun, yet seasons are caused because of it. So we are going to study in detail about what exactly the term motion is?

For Example: If we consider a pole and a car, then a pole will be stationary as it can’t change its location, but the car can alter. So, to say that car is at rest or motion we need to consider its motion concerning that of the pole or any other stationary object. This stationary object can also be called a reference point.

Let us consider a car standing in front of the house. Let’s say primarily it is at location A then after some time, it moves to location B. That means it has changed its position concerning the stationary object that is the house.

And if that car keeps on standing at position A that means it hasn’t changed its position concerning the house that means it is at rest so here we define the terms rest and motion.

Rest: When a body doesn’t change its position for its surroundings or reference point, then the body is said to be at rest.

Motion: When the body changes its position to its surroundings or reference point, then the body is in motion.

So, we can say that when an object is moving or in motion, it possesses the following characteristics as given below.

Characteristics of a moving object:

The moving object changes its position with time. Now we have seen that movement of the car can be easily seen that is we don’t have to concentrate much but to know the movement of an arm of clock let’s say hour hand we need to keep verify this is because some motion is that quick that we can see it happening, on the other hand, some motion is so slow that it can’t be seen undoubtedly.

We can elaborate it as: Our wristwatch has three hands: minute, seconds and hour hand .out of them second-hand moves fast that its motion can be seen but to see the motion in hour hand and minute hand we have to keep the track as the motion in them is moderately slow.

We learn so many physical quantities like distance, velocity and many more. All these quantities are mostly classified under two categories that is scalar or vector depending upon whether they provide the complete information about the magnitude (value) and direction or give the unfinished information like only direction or only value.

The quantities that depend upon the magnitude and not the direction is called scalar quantities. They are represented as their symbol.

For Example: If you voyage to Delhi to your relative’s place and if somebody asks you about the distance what do you reply. We say it was like a 250km run from Chandigarh. You don’t tell him that 25km towards the east, then west. We just say 250km that means we explain it only in magnitude, and we don’t identify directions. So, it is a scalar quantity.

The physical quantities depend upon magnitude as well as direction. They are represented by putting an arrow on their symbol.

For Example: Now if you voyage a straight short path in a specific way then we can say that I travelled 25km towards the east. So, in this case, the direction is specified, so it falls in the category of a vector quantity. 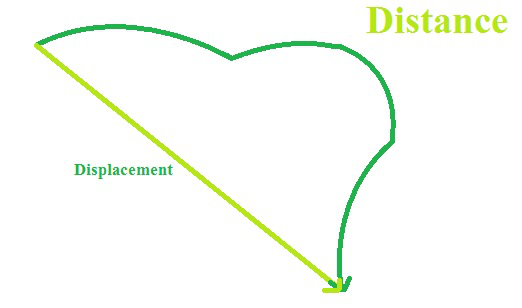 The size or extent of a physical quantity is magnitude. In physics, we have scalar and vector quantities. Scalar quantities are only expressed as magnitude. E.g: time, distance, mass, temperature, area, volume.

Vector quantities are articulated in magnitude as well as the direction of the entity. E.g: Velocity, displacement, weight, momentum, force, acceleration, etc.

Time is the period of an incident that is articulated in seconds. Most physical phenomena occur in time. It is a scalar quantity. Speed is the rate of change of distance. If a body covers a certain distance in a certain amount of time, its speed is known by

The rate of change of displacement is velocity. It is a vector quantity. Here the direction of motion is specified.

Acceleration is the rate of change of velocity. It is a vector quantity. Velocity varies with time in non-uniform motion, i.e., change in velocity is not 0. It is denoted by “a”. 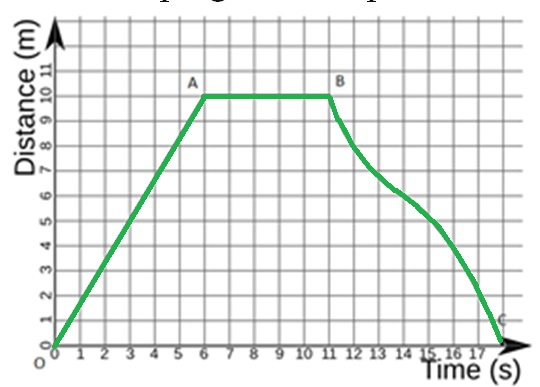 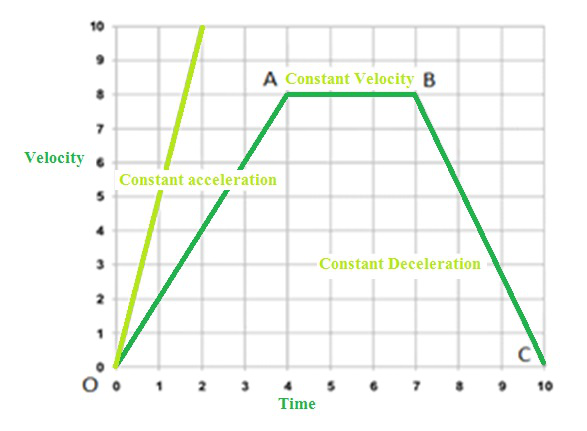 The motion of an entity moving at uniform acceleration can be described with the assist of three equations, namely

Question 2. A train 200 m long is moving with a velocity of 72 km/hr. Find the time it takes to cross the bridge which is 1 km long?

Question 3. An object travels 26 m in 4 s and then another 22m in 3s. What is the average speed of the object?

Question 5. A train starts from rest and accelerate uniformly at the rate of 10 m/s2 for 5 sec. Calculate the velocity of train in 5 sec.

Question 6. An electron moving with a velocity of 5 × 103 m/s enters into a consistent field and acquires a consistent acceleration of 2 ×103 m/s2 within the direction of the initial velocity.

i. Determine the time during which electron velocity is going to be doubled?

ii. How much distance electron would cover at this time?