For more details on how Maven works, how to install Maven and its applications, please visit: Introduction to Apache Maven

Maven Lifecycle: Below is a representation of the default Maven lifecycle and its 8 steps: Validate, Compile, Test, Package, Integration test, Verify, Install and Deploy. 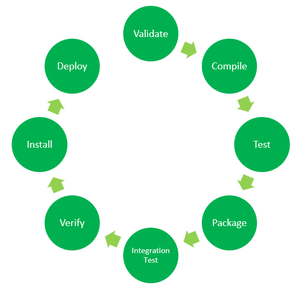 8 Phases of the Default Maven Lifecycle

The default Maven lifecycle consists of 8 major steps or phases for compiling, testing, building and installing a given Java project as specified below:

Maven follows a sequential order to execute the commands where if you run step n, all steps preceding it (Step 1 to n-1) are also executed. For example – if we run the Installation step (Step 7), it will validate, compile, package and verify the project along with running unit and integration tests (Step 1 to 6) before installing the built package to the local repository.

Generally when we run any of the above commands, we add the mvn clean step so that the target folder generated from the previous build is removed before running a newer build. This is how the command would look on integrating the clean step with install phase: mvn clean install

Similarly, if we want to run the step in debug mode for more detailed build information and logs, we will add -X to the actual command. Hence, the install step with debug mode on will have the following command: mvn -X install

Consider a scenario where we do not want to run the tests while packaging or installing the Java project. In this case, we use -DskipTests along with the actual command. If we need to run the install step by skipping the tests associated with the project, the command would be: mvn install -DskipTests

Next
Comparable vs Comparator in Java
Related Articles
1. Lifecycle and States of a Thread in Java
2. JSF Lifecycle - Execute and Render Stage
3. Activity Lifecycle in Android with Demo App
4. Hibernate Lifecycle
5. Fragment Lifecycle in Android
6. Maven and JUnit Project - Extracting Content and Metadata via Apache Tika
7. Difference between Gradle and Maven
8. Creating Java Project Without Maven in Apache NetBeans (11 and Higher)
9. JUnit for Armstrong, Unique and Perfect Numbers as a Maven Project
10. How to Make a Project Using Spring Boot, MySQL, Spring Data JPA, and Maven?
Article Contributed By :