Matrices and its Types | Class 12 Maths

A rectangular array in structure with entries is known as Matrix. A matrix has one or more than one number of rows and columns. Each entry in the matrix may contain numbers, alphabets, symbols, etc. Entries in horizontal lines are known as rows and entries in vertical lines are known as columns. Each entry belongs to a row and a column. A matrix is represented by [A]m×n where m is the no of rows and n is the no of columns present in a matrix. and an element of the matrix can be represented as aij where i and j are the ith row and jth column to which an element belongs. elements where i and j are equal (that is row number and column number is equal) is known as a diagonal element. Matrix A can be written as: 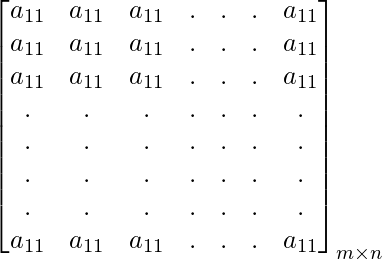 Example of a Matrix

Types of The Matrix

There are many types of matrix. We will discuss one by one:

A matrix that contains only one row and any no of columns is known as a row matrix.

A matrix that contains only one column and any no of rows is known as a column matrix.

A matrix which has only one element is known as singleton matrix. In this type of matrix number of columns and the number of rows is equal to 1.

A matrix having all elements as 0 is known as null matrix.

A matrix that has all elements as 0 except diagonal elements is known as a diagonal matrix.

This matrix is a kind of square matrix that has all elements as 0 below the diagonal.

This matrix is a kind of square matrix in which all the elements above the diagonal are 0.

Trace of a Matrix

Properties of a Trace of Matrix

i) Trace of the sum of two matrices is equal to sum of trace of individual matrix.

ii) Trace of a matrix that is multiplied by some scalar is equal to the multiplication of trace of matrix and scalar.