The step() function designs the plot such that, it has a horizontal baseline to which the data points will be connected by vertical lines. This kind of plot is used to analyze at which points the change in Y-axis value has occurred exactly with respect to X-axis. This is very useful in discrete analysis. The step plotting can be combined with any other plots. The occurrence of steps can also be formatted by supplying appropriate parameter values. The parameters for this function are tabulated below.

The where parameter is used to denote at which place the vertical line should connect the data point to the horizontal base line. It decides where to place the step like visualization. To be more clear, this parameter decides where the Y-value should be constantly drawing a horizontal line. It can take any one among the three values which are explained below with examples.

First, consider two arrays that are to be plotted :

The array x contains some integers and the array y contains the squares of the numbers in the corresponding index in x. If these values are simply plotted without any step function one gets a straight line plotted in the graph as given below. 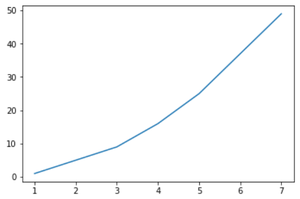 a plot without steps

pre : The Y-value remains constant to the left of the data point.  For example the value y[i] remains constant between x[i-1] and x[i]. The plot with step for the same one plotted above is given below. In the code below, ‘g^’ denotes the line color is green and the marker should be an upward triangle. 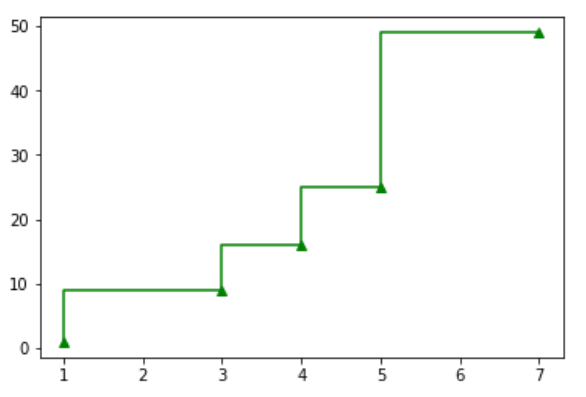 In the image above you can see the horizontal lines to the left of the data points which are marked by small green triangles. For example, x[0] is 1 and its corresponding y-value is 1. The next value x[1] is 3 and the y-value is 9. Now you can see a constant line in 9 from 1. The vertical line shoots up once the data point 3 is reached in the X-axis. To be more clear, look at the image with highlighted portions, given below. 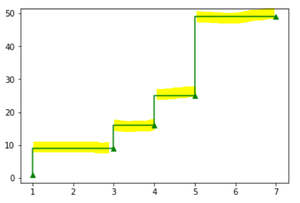 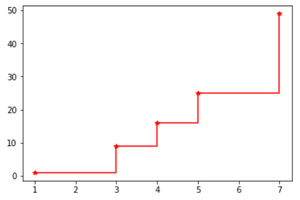 Look at the highlighted portions to view the difference between the values ‘pre‘ and ‘post‘. 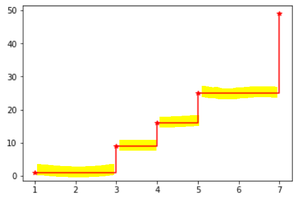 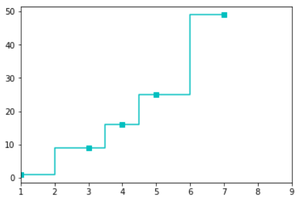 For better understanding, look at the image below. 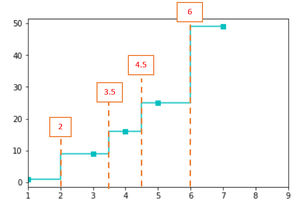 The step() can be combined with other plots also. Look at the example below for the same data points used above. 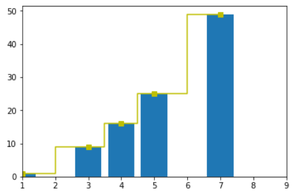 In the same way, any plot type can be combined with the step() function.