The previous articles talked about some of the Continuous Probability Distributions. This article covers one of the distributions which are not continuous but discrete, namely the Binomial Distribution.

To understand the Binomial distribution, we must first understand what a Bernoulli Trial is. A Bernoulli trial is a random experiment with only two possible outcomes. These two outcomes are usually referred to as Success and Failure, but they may be given any label necessary. Each Bernoulli trial or a Random experiment is independent of the other.
For example, consider the scenario where we need to find the probability of the event of a even number showing up on die roll.
If E = Even number shows up, then

(or simply ‘q’) may be referred as the probability of Failure. Notice that,

, since there are only two possible outcomes.
Now consider that the experiment is repeated and we try to find the probability of success. We get,

This is the same probability as the first experiment. This is because the two experiments are independent i.e. the outcome of one experiment does not affect the other.
Now that we know what a Bernoulli trial is, we can move on to understand the Binomial Distribution. 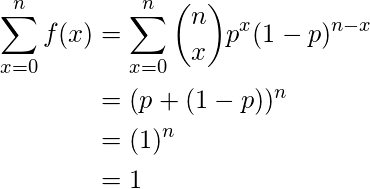 Notice that in the above formula, if we put n=1, we get the same result as a Bernoulli trial. Here x can take value 0 or 1(since number of successes can be 0 or 1 in one experiment).

To find the Expected Value of the Binomial Distribution, let’s first find out the Expected value of a Bernoulli trial. Let p and q be the probabilities of Success(1) and Failure(0).

Since the Binomial Distribution has n Bernoulli trials, the expected Value is multiplied by n. This is due to the fact that each experiment is independent and the Expected value of the sum of Random variables is equal to the sum of their individual Expected Values. This property is also called the Linearity of Expectation.

The variance of the Binomial distribution can be found in a similar way. For n independent Random Variables,

Here, Var[BT] is the Variance of 1 Bernoulli trial.

Using this result to find out the variance of the Binomial Distribution.

The Standard Deviation of the distribution-