unless both are equal. Formally, “A relation

Example: Show that the inclusion relation

is a partial ordering on the power set of a set.

Solution Since every set

is anti-symmetric. It is transitive as

is a partial ordering on

are said to be comparable if either

Total Order: It is possible in a poset that for two elements

i is called a total order. A totally ordered set is also called a chain.

would be converted to a Hasse diagram as follows: 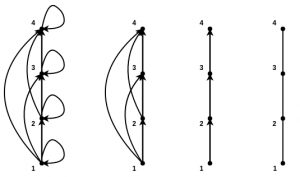 Extremums in Posets: Elements of posets that have certain extremal properties are important for many applications.

Note: If the maximal or minimal element is unique, it is called the greatest or least element of the poset respectively.

Bounds in Posets: It is sometimes possible to find an element that is greater than or equal to all the elements in a subset

Solution: For the set

Lattices: A Poset in which every pair of elements has both, a least upper bound and a greatest
lower bound is called a lattice. There are two binary operations defined for lattices –

Sub Lattice: A sublattice of lattice

Identities for join and meet:

Distributive laws may or may not hold true for a lattice:

complemented lattice: Suppose L is a bounded lattice (with 0 and 1), and a∈L(a belongs to L). A complement of a is an element b∈L such that :