Magnesium is a chemical that appears in gray solid. It is a mineral that’s crucial to the body’s function. It as symbol Mg and atomic number 12. It plays important role in over 300 enzyme reactions in the human body. It naturally presents in a variety of foods, also available as a supplement, ingredient in antacids and laxatives. Sulfate also Sulphate is ion, a salt of sulfuric acid with molar mass of 96.06 g/mol. Sulfate is soluble in water, divalent anion produced by the oxidation of elemental sulfur, organic sulfur. The empirical formula of sulfate is SO42-. Epsom salt is MgSO4· 7H2O commonly found in its heptahydrate form. It’s a synthetic compound comprised of magnesium, sulfur, and oxygen. It gets its name from the town of Epsom in Surrey, England. 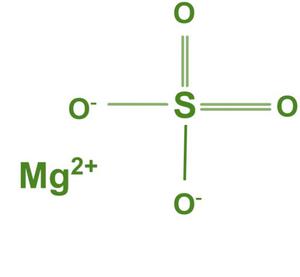 On magnesium hydroxide and,

High concentrations can cause a condition called hypermagnesemia. It releases fumes of sulfur oxides which are toxic and corrosive when it decomposes heated.

Question 1: Is Epsom salt and magnesium sulfate something very similar?

Epsom salt is otherwise called magnesium sulfate. It’s a synthetic compound comprised of magnesium, sulfur, and oxygen. It gets its name from the town of Epsom in Surrey, England, where it was initially found. Regardless of its name, Epsom salt is something else altogether than table salt.

MgSO4 hydrates are found in practically completely known mineralogical structures. The regular simple of “Epsom salt” is epsomite. Meridianiite, MgSO4.11H2O, has been seen as on the outer layer of frozen lakes, and it is remembered to exist on Mars too. The following lower hydrate is hexahydrate. Pentahydrate, star keyite, and, particularly, sanderite, the following three lower hydrates, are phenomenal. Kieserite is a monohydrate that is found in evaporite stores in enormous amounts. Some consuming coal dumps have been found to contain anhydrous magnesium sulfate.

Try not to utilize magnesium sulfate as a diuretic without clinical counsel assuming you have: extreme stomach torment, sickness, regurgitating, a punctured gut, an inside hindrance, serious blockage, colitis, harmful megacolon, or an unexpected change in entrail propensities that has endured fourteen days or longer.

Question 4: What are advantages of magnesium glycinate?

Magnesium glycinate has been displayed to have an assortment of advantages, including serving to:

Question 5: What is normal use for magnesium sulfate?

In medication as a mineral enhancement used to forestall and treat low measures of magnesium in the blood. A few brands are likewise used to treat side effects of a lot of stomach acid, for example, stomach upset, indigestion, and corrosive acid reflux.

Question 7: Where Magnesium sulfates are found?

Magnesium sulfates are universal minerals found in the earth crust. Most of their events are connected to supergene processes. Some of them are additionally key parts of deposits of evaporitic potassium-magnesium (K-Mg) salts.