MAC Contention based with Reservation D-PRMA

Packet Reservation Multiple Access is already built protocol, difference is that in this it is distributed for use in Ad Hoc. So basically, it is updated version of PRMA. It is TDMA (Time Division Multiple Access) based technique. 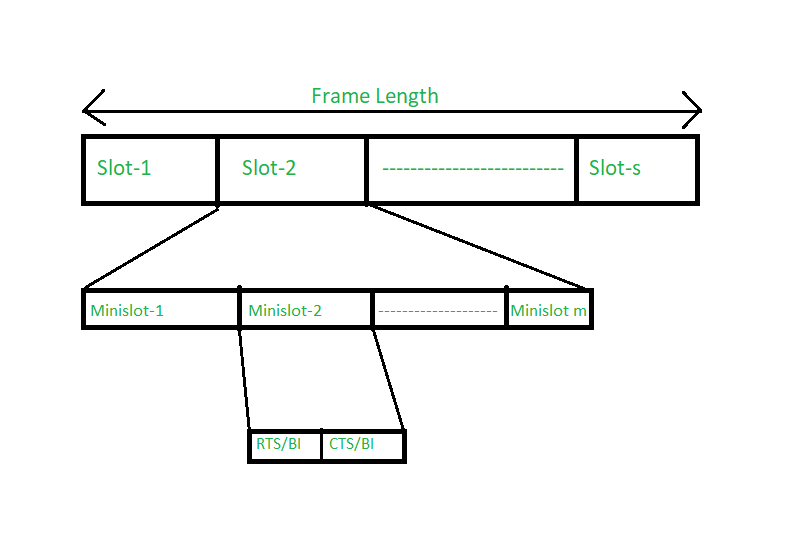 In this, channel is divided in frame lengths. In every frame, there are some slots say, s slots. It means that there is channel, it’s small part is frame and further it’s small part is slot and then slots has it’s part as minislots.

Example –
There are two terminals named A and B. A has further named D and E. They have same channel, in which this process is going on. B is one to which data is to be transmitted. Now, as we know that there will be some kind of packet reservation.

A is sending CTS to everyone say, D and E. Till the time, there is value in CTS/BI, they know that they cannot transmit value as A is sending value to CTS/BI. Now suppose, for another packet say, that F wants to send to C terminal, where RTS is listening and responding but CTS is not. It means that F will not relate to CTS now and if it is getting RTS for terminal C, then F is allowed to transmit data. So, this avoids exposed terminal problems.

Basically, this protocol has 2 basic requirements –

In short, this protocol is used for voice traffic. Overall, if any node wants to transmit its package, then the first condition is to reserve the slot.