The Lower and Upper Bound Theory provides a way to find the lowest complexity algorithm to solve a problem. Before understanding the theory, first, let’s have a brief look at what Lower and Upper bounds are.

In the above example, it’s easily predictable that the lower bound is O(n2).

Ordered Searching –
It is a type of searching in which the list is already sorted.
Example-1: Linear search
Explanation –
In linear search, we compare the key with the first element if it does not match we compare it with the second element, and so on till we check against the nth element. Else we will end up with a failure.

Calculating the lower bound: The max no of comparisons is n. Let there be k levels in the tree. 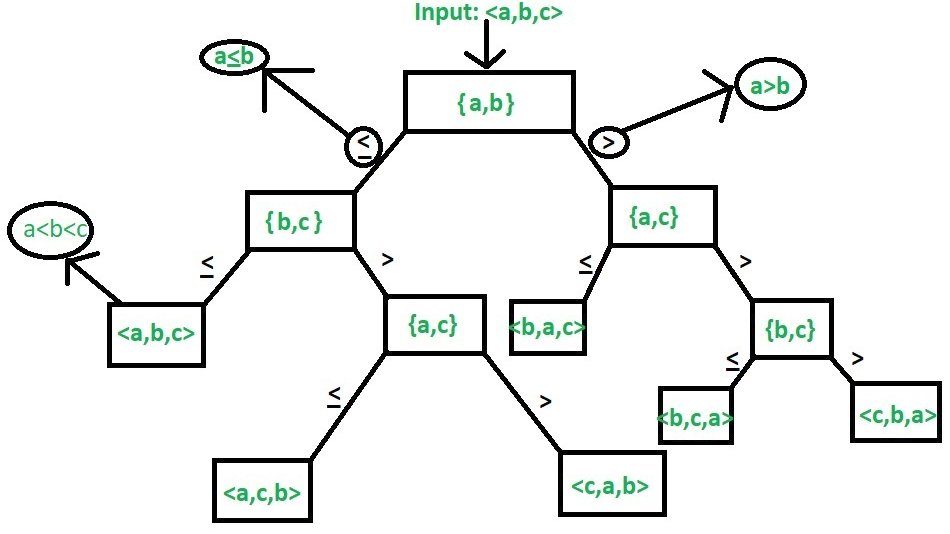 Theorem: To prove that the optimal algo of solving a n degree polynomial is O(n)
Proof: The best solution for reducing the algo is to make this problem less complex by dividing the polynomial into several straight-line problems.

The complexity of this code is O(n). This way of solving such equations is called Horner’s method. Here is where lower bound theory works and gives the optimum algorithm’s complexity as O(n).
2. Upper Bound Theory:
According to the upper bound theory, for an upper bound U(n) of an algorithm, we can always solve the problem at most U(n) time. Time taken by a known algorithm to solve a problem with worse case input gives us the upper bound.

Next
How to Analyse Loops for Complexity Analysis of Algorithms
Related Articles
1. Efficient method to store a Lower Triangular Matrix using Column-major mapping
2. Proof that Independent Set in Graph theory is NP Complete
3. Generate an array of given size with equal count and sum of odd and even numbers
4. Code Optimization Technique (logical AND and logical OR)
5. Asymptotic Analysis and comparison of sorting algorithms
6. Master Theorem For Subtract and Conquer Recurrences
7. Analysis of algorithms | little o and little omega notations
8. Complexity of different operations in Binary tree, Binary Search Tree and AVL tree
9. Different types of recurrence relations and their solutions
10. Find and Count total factors of co-prime A or B in a given range 1 to N
Article Contributed By :