What is Forwarding?
Forwarding is moving incoming packets to the appropriate interface. Routers use a forwarding table to decide which incoming packet should be forwarded to which next hop.

What is an IP prefix?
IP prefix is a prefix of IP address. All computers on one network have the same IP prefix. For example, in 192.24.0.0/18, 18 is the length of the prefix and prefix is the first 18 bits of the address.

What happens if the prefixes overlap?
Since prefixes might overlap (this is possible as classless addressing is used everywhere), an incoming IP’s prefix may match multiple IP entries in a table.
For example, consider the below forwarding table

In the above table, addresses from 192.24.12.0 to 192.24.15.255 overlap, i.e., match with both entries of the table.
To handle the above situation, routers use the Longest Prefix Matching rule. The rule is to find the entry in a table which has the longest prefix matching with the incoming packet’s destination IP and forward the packet to the corresponding next hope.
In the above example, all packets in overlapping range (192.24.12.0 to 192.24.15.255) are forwarded to next hop B as B has a longer prefix (22 bits). 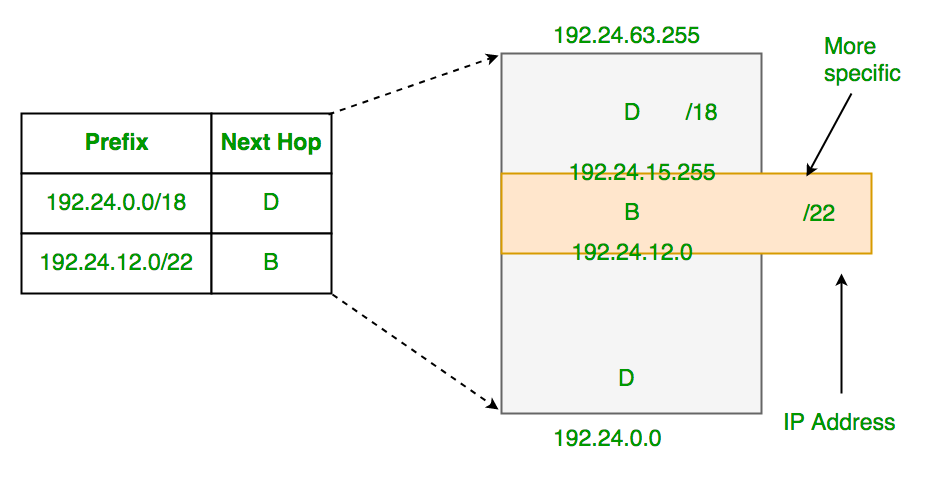 The identifier of the output interface on which this packet will be forwarded is ______.

Exercise
Consider the following routing table of a router.