Local as View (LAV) is approach that view-based data integration systems (VDISs) use to perform data Integration i.e. searching and combining data from various sources. It describes each local schema as function over global schema. Here data sources are defined as views over provided schema. Schema is designed in such way that it maintains stability even when some data sources join or leave integration system. Hence LAV allows adding or subtracting of sources to integration system autonomously of other sources.

Earlier VDISs followed Global as View (GAV) approach where global schema is described in terms of local schema. Since global schema is expressed in terms of sources, global relations cannot represent any information not present in at least single source. Moreover, GAV-based systems do not permit addition of source to system independently of other sources.

Therefore, to overcome limitations of GAV approach, researchers came up with LAV approach.

LAV can be thought of as source owners’ view of system by describing which data of global database are present in source. Local schema i.e. sources are described in terms of global schema using various expressions. Source provides expressions to generate information from pieces of global schema. With the help of Mediator, these expressions are collated to find all probable ways to answer query being fired.

LAV follows dual approach in which local relations are defined as views over global relations. Aim is to describe global schema in such manner that individual definitions do not alter when data sources join or leave integration system except for definitions of sources that are involved in alteration. Quality of this system is measured based on how well we have characterised sources.

In LAV local to global correspondence can be represented as set of mappings :

Where Ri is any relation of local schema, Ui is query over global schema and I is query that returns all attributes of Ri.

This can be illustrated by the following example : 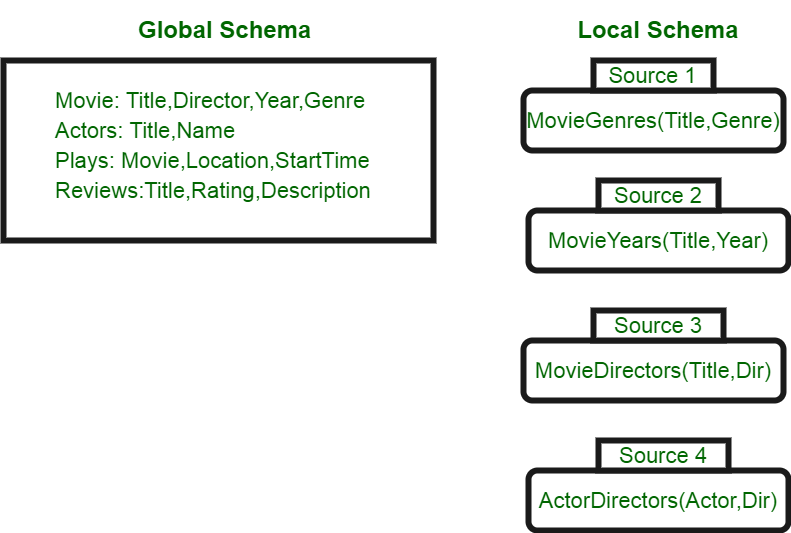 Examples of Data integration systems that follow the LAV approach :