Physics and chemistry are both concerned with the study of matter, energy, and their interactions. Scientists know that matter can change states and that the sum of a system’s matter and energy is constant because of thermodynamic rules. Matter changes state when energy is added or removed, forming a state of matter. One of the ways in which matter interacts with itself to generate a homogeneous phase is called a state of matter.

“State of matter” and “phase of matter” are interchangeable terms. This is fine for the most part. A system can technically have multiple phases of the same condition of matter. A solid bar of steel, for example, could comprise ferrite, cementite, and austenite. There are two liquid phases in a mixture of oil and vinegar (a liquid).

Liquefaction is the transformation of a gaseous substance into a liquid condition.

For instance, oxygen is usually a gaseous substance that may be changed to a liquid by exerting enough pressure and lowering the temperature.

To liquefy a gas, the molecules must be brought closer together. By lowering the temperature and increasing the pressure, this can be accomplished. When the pressure on a gas is increased, the molecules get closer and closer until they merge to create liquids at a specific pressure.

When the temperature of a gas is lowered, however, the molecules lose kinetic energy, resulting in a significant fall in velocity. Slow-moving molecules can’t resist the force of attraction, so they get closer and closer until they clump together to create a liquid.

The liquefaction of gases is caused by a decrease in temperature and an increase in pressure.

Conditions Necessary for Liquefaction of Gases

The following are two conditions that must be met in order for gases to be liquefied:

T. Andrews investigated the phenomenon of gas liquefaction in 1869 and was successful in liquefying a number of gases. He discovered that no matter how high the pressure applied, each gas has a specific temperature above which it cannot liquefy. This temperature is referred to as the gas’s critical temperature. It is possible to define it as follows:

The critical temperature of a gas is the temperature above which it is impossible to liquefy it with any amount of pressure.

for example, Carbon dioxide has a critical temperature of 30.98oC. This means that no amount of pressure given to carbon dioxide will cause it to liquefy above 30.98oC.

Tc is a symbol for the critical temperature. It is provided by-

Where R is the gas constant and a and b are Van der Waal’s constants.

The critical pressure of a gas is the minimal pressure required to liquefy it at the critical temperature. Pc is the symbol for it, and it is given by-

Where a and b are Van der Waal’s constant.

The critical volume of a gas is the volume occupied by one mole of the gas at critical conditions. Vc is the symobl for it, and it is supplied by-

The effective volume of the molecules per mole of gas is denoted by b.

The critical constants of gas are Tc, Pc, and Vc.

T. Andrews conducted a series of carbon dioxide tests, analyzing the pressure-volume relationship for the gas at various temperatures and plotting the results. P–V isotherms of carbon dioxide are the names given to these curves. At 0°C, 21°C, 31.1°C, and 50°C, the isotherm was obtained. 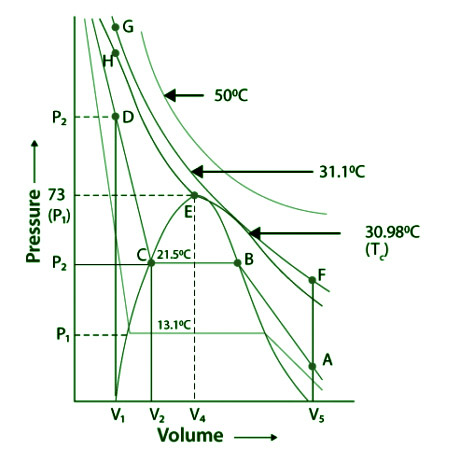 The following principles can usually be applied to gas cooling:

Methods of Liquefaction of Gas 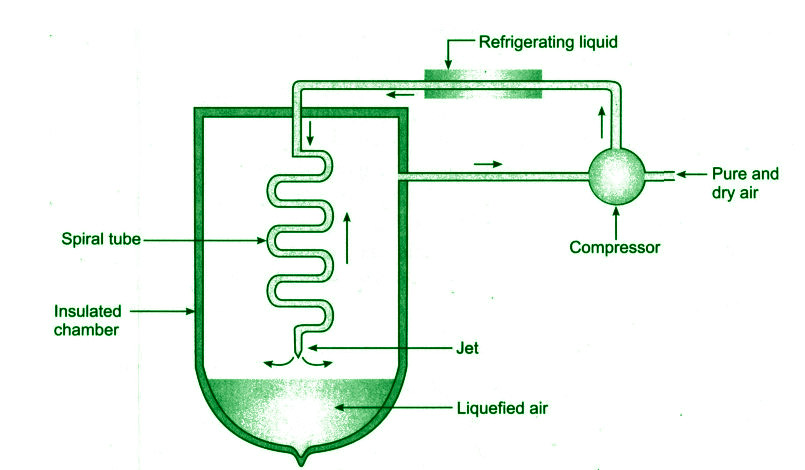 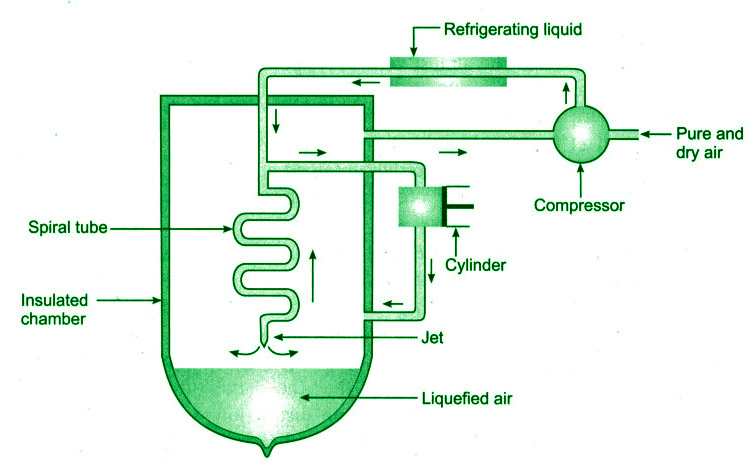 Question 1: What is the process of liquefaction?

Liquefaction is the transformation of a gaseous substance into a liquid condition.

For instance, oxygen is usually a gaseous substance that may be changed to a liquid by exerting enough pressure and lowering the temperature.

Question 2: What role does critical temperature play in the liquefaction of gases?

Question 3: What are the uses of the liquefaction of gases?

The most major benefit of gas liquefaction is that it allows for considerably more compact storage and transportation than is possible in the gaseous condition. LPG and Liquid Oxygen, for example, are two of the most significant gases.

Question 4: What role does pressure play in gas liquefaction?

When enough pressure is applied to a gas, the space between its particles shrinks, the gas begins to compress, and the gases begin to liquefy.

Question 5: What is the principle of the liquefaction of gases?

The liquefaction of gases requires high pressure and low temperature, according to the principle. Increasing the pressure leads the gas molecules to move closer together, while lowering the temperature causes the attractive forces to rise.

Question 6: What are the two most important steps in the gas liquefaction process?

The following are the two primary steps involved in the liquefaction of gases:

Complete Interview Preparation
View Details
System Design-Live Classes for Working Professionals
View Details
Data Structures & Algorithms- Self Paced Course
View Details
Most popular in Class 11
Most visited in School Chemistry
We use cookies to ensure you have the best browsing experience on our website. By using our site, you acknowledge that you have read and understood our Cookie Policy & Privacy Policy