When a person visits a place, the first thing he checks is that if there is an open Wi-Fi connection available so that he could get access to the internet. Wi-Fi has become the fourth most important necessity after food, cloth and shelter. Without Wi-Fi one’s life becomes boring in this modern era. Wi-Fi is even important in daily life as many of the major work in offices and other work spaces are done wirelessly over Wi-Fi. From sending printing to printer to turning on lights in a room wirelessly, Wi-Fi comes into picture every time.

Wi-Fi signals are generated by Modem and routers which enables these signals to spread in a huge radius. This makes it very convenient for user to get access to it even if he is sitting at the other corner of the house away from the router. But these Wi-Fi signals become the biggest enemy of the user. Firstly, they harm user’s health by attacking the brain neurons, though it is a very slow and negligible effect but yes, it is there. Secondly since the Wi-Fi signals spread till their limit, other unknown people may also try to access it, there are hackers which may hack into your Wi-Fi system and seek out your personal information. Last but not the least if large number of people are using the same Wi-Fi at the same time it also reduces the bandwidth which reduce the quality of internet using experience over that particular Wi-Fi system.

To overcome most of the above problems and others, and difficulties related to Wi-Fi, a new technology was recently invented Li-Fi (Light Fidelity). Li-Fi is a bidirectional, high-speed and fully networked wireless communication technology similar to Wi-Fi. Li-Fi is a fast and cheap optical version of Wi- Fi, the technology of which is based on Visible Light Communication (VLC).VLC is a data communication medium, which uses visible light between 400 THz (780 nm) and 800 THz (375 nm) as optical carrier for data transmission and illumination. 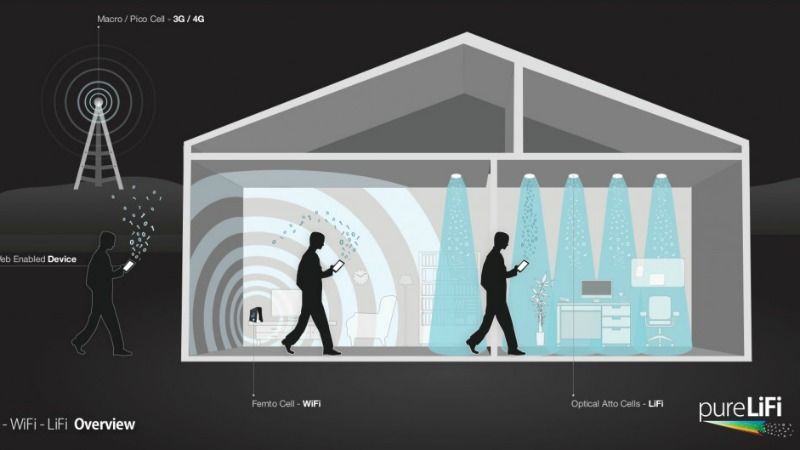 In this technology, Wi-Fi signals are converted into light form and if your device is under this light then Wi-Fi works on your mobile. The main advantage of this technology is that when you turn on the light of your room, your Wi-Fi will limit only to your room and to your device, no other person will be able to use it and not like router the whole house would be under Wi-Fi signals when only you want to use it in your room. You might think that if you want to close the light and then use this Wi-Fi technology, then scientists have solved your problem too. You can use this Light Wi-Fi in its very dim light also, so next time you want to text in dark, it will not be much of a problem. This technology will reach most of the places soon and will replace routers.