The light is an electromagnetic, transverse, wave that can be seen or caught by the typical human eye. The wave nature of light was first illustrated through the experiments on diffraction and interference. When these light rays fall onto the lenses then lenses behave depending on the type of lens it is falling on. The light rays may be diffracted or interfered with depending on the foci of the lens. Basically, lenses are magnifying glasses with curved sides. They also have magnifying property due to which they are used in telescopes and other magnifying devices. They are also used in cameras to capture light rays.

What is a Lens?

Lenses are basically curved-sided magnifying lenses. A lens is a fragment of translucent glass that, by refraction, concentrates or disperses light rays. Lenses are used in telescopes and other magnifying instruments because of their magnifying property. They are used in cameras to collect light rays. In cameras, light is collected by a collection of lenses rather than by a single lens. A lens’s magnification is the relationship between the size of the image produced and the size of the target. Lenses may also be used in groups to reduce blurriness or distortion in the picture created by the lens.

Thus, a lens is a small piece of material that is modified to catch up with an image with the help of rays of light. In this article, we are going to discuss the lens formula, terms related to it, and also the derivation of magnification using the lens formula.

There is a wide range of lenses in today’s usage and generally, they are categorized into two types compound lens and simple lens. And according to the shape and the purpose of the lens is classified into two types concave lens and convex lens which we are going to discuss below.

Spherical Lenses: In principle, spherical lenses, like spherical mirrors, are a part cut off from a bigger sphere. The refractive index of glass is higher than that of the surrounding air. Light rays passing from air to glass are obviously refracted. In cameras, light is collected by a collection of lenses rather than by a single lens. A lens’s magnification is the relationship between the size of the image produced and the size of the target. Lenses may also be used in groups to reduce blurriness or distortion in the picture created by the lens.

Further, the spherical lenses are of two types: Concave and Convex lenses, which are discussed more in the following topics.

A concave lens is a type of lens with one side curved inwards. This lens with both sides curved inward is called a biconcave lens. Concave lenses are diverging lenses, i.e, they spread light rays that have been refracted through them. They even have the ability to diverge a parallel beam of light. For a concave lens, the edges are wider than the center or the center is thinner than the edges. These are used in spectacles in order to treat myopia or short-sightedness. The concave lens is also called a diverging lens as rays of light diverge when rays of light fall on the lens. A concave lens has two focal points to the two sides and these focal points are equidistance to the curvature. It produces a smaller image for the viewer. The focal point of a concave lens is a point from which the light rays are parallel to the axis seem to diverge, after passing through the lens. The distance from the optical center of the lens to the focal point is called the focal length of the lens.

The image formed in a concave lens must have the following characteristics:

Now let us derive the lens formula with the help of the diagram shown below: 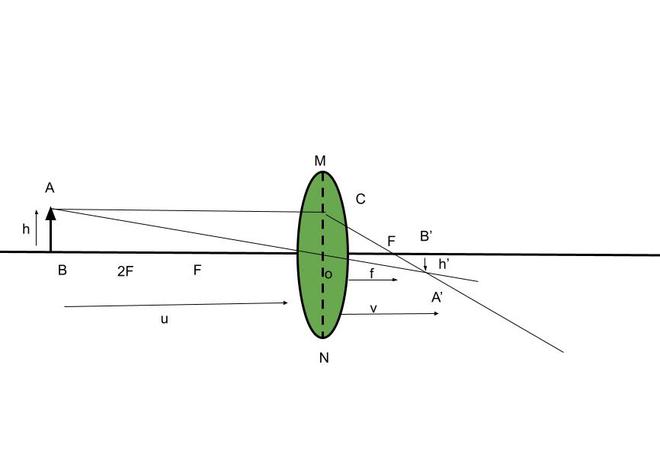 From the above figure, we can write as

Now divide both the sides by uvf, we get

which is the required Lens formula.

where f is the focal length.

u is the object’s distance from the lens.

v is the image distance from the lens.

The Magnification lens is given as below:

Problem 1: What is the length of the image produced by placing the object of 10cm away from a convex lens of focal length equal to 5 cm?

As the object is on the left side so, the object distance, u is -10 cm.

Using the lens formula, the focal length is given by:

Now, Solve for v as:

Therefore, the distance of the image is 10 cm.

Given that, the distance of the image is positive that means the image is created on the right side of the lens.

Problem 3: If an object is placed at a distance of 3 cm from a concave lens of focal length 12 cm. Find the position and nature of the image?

The object distance of the concave lens, u is -3 cm.

By using the lens formula,

Hence, the image is formed at 2.4 cm in front of the concave lens (on its left side), Virtual and erect.

Problem 4: The magnification of the mirror is -3 cm and the height of the object is 16cm then what is the length and nature of the image formed?

The magnification, m is -3cm.

The formula to calculate the magnification is:

where h’ is the height of the image.

Substitute the given values in the above expression as:

Therefore, the height of image is 48 cm.

Since, m is negative, so the nature of the image is real and inverted.

Problem 5: What is the power of the concave lens whose focal length is 4 cm?

As the given lens is concave therefore the focal length will be negative.

To find the power of lens the formula is,

Therefore, Substituting the given values as: