Lead is a chemical element and is a substance that contains only one type of atom. Its official chemical symbol is Pb and its atomic number is 82. This means that there are 82 protons in the core of the lead atom. Lead has the highest atomic number of any stable (non-radioactive) element. Lead is a soft, malleable, ductile, dense metallic element. It is mainly derived from the mineral galena and is found in ores that also contain zinc, silver, and copper.

Chloride is a halogenated anion formed when chlorine receives an electron to form an anion. It serves as a human metabolite, E. coli metabolite, and cofactor. Halide anion and monatomic chlorine. It is a conjugate base of hydrogen chloride.

Lead (II) chloride The inorganic compound lead (II) chloride gives the appearance of a white solid under ambient conditions. In water, this chemical has low solubility. Lead Chloride II  is the main reagent containing lead. It occurs naturally in the form of the mineral Cotunnite. The main precursor for many organometallic lead derivatives, such as Plumbocene, is lead (II) chloride. When lead chloride combines with molten sodium nitrite, lead oxide is formed.

Structure Of Lead (II) chloride The chemical formula of lead chloride is PbCl2, commonly known as lead chloride, but its IUPAC name is lead (II) chloride. Chlorine atoms are bonded to the central lead atom by a covalent bond with a bond angle of 98°, and the isotope bond distance of each chlorine atom to the central lead atom is 2.44 Å. To explain the nature of the bond, we need to take into account the electron configuration of the molecule and its atoms. Now the atomic number of the lead atom is 82. This means that the electron configuration will be Pb 6s2 4f145d106p2. Therefore, there are two electrons in the lead shell that can be donated or shared. On the other hand, the atomic number of chlorine is 17. This means that the electron configuration is 1s2 2s2 2p6 3s2 3p5. This means that the presence of unpaired electrons in the 3p orbital makes the shell unstable and requires electrons to raise the octane number to complete. Therefore, the two chlorine atoms share each of the two lead electron pairs present in the 6s shell to complete the octane, making it a stable molecule. Lead (II) chloride molecules form a curved structure. Therefore, the structural formula of the lead chloride molecule is shown as follows. 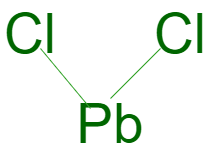 Question 1: Is it a lead (II) chloride cation?

Lead (II) chloride is not always a cation, but the lead atom in the molecule can donate two electrons in the 6s shell to form a cation, while each chlorine atom in the 3p shell acquires electrons to complete the octane and therefore functions as a cation.

PbCl2 (lead (II) chloride) is an inorganic compound that is a white solid at room temperature. Low water solubility. One of the most important lead-based reagents is lead (II) chloride. It also occurs naturally as a mineral Cotunnite. The ionic bond that holds Pb2+ in Cl– is insoluble in cold water because it is stronger than the hydration force between the ion and the water molecule.

Question 3: Is Lead(II) Chloride a strong or weak electrolyte?

Question 4: What kind of bond is lead chloride?

A covalent bond with a  bond angle of 98o connects the chlorine atom to the central lead atom, and the isotope bond distance between each chlorine atom and the central lead atom is 2.44. In PbCl4,  lead is in the Pb4 state and Cl has a significant charge density, but it is not very large and is easy to polarize. The high charge density of lead polarizes anions much more efficiently, shifting the electron density. It is partially shared, resulting in a strong covalent bond.

Lead White Chloride is also known as Pattinson’s White Lead with the chemical formula PbCl2. Originally used as automotive paint, Pb (OH)2 is now banned in many countries due to its high health risks.

Lead chloride can be carcinogenic to humans. Inorganic lead compounds have been shown to cause kidney cancer in animals and are associated with lung, brain, stomach, and kidney cancer in humans. Carcinogens are substances that cause cancer.  Nausea, vomiting, and diarrhea are symptoms of gastrointestinal inflammation when taking lead chloride. Lead compounds can be harmful to the hematopoietic organs, kidneys, and central nervous system when ingested. The effects may be similar to those reported for ingestion.