Chemistry is the study of matter’s transformation from one form to another. These transformations are frequently caused by the interaction of two different types of matter. Certain fundamental rules govern the combination of different elements to form compounds. These rules are known as the law of chemical combination.

Law of Conservation of Mass

Antoine Lavoisier developed this law in 1789. According to the law, ‘Mass cannot be created or destroyed in a chemical reaction.’ 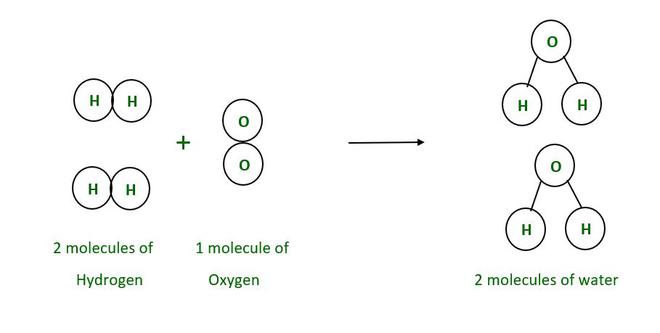 In 1799, Joseph Louis Proust developed and proved this law. According to the law, ‘the elements are always present in definite proportions by mass in a chemical substance.’

When a compound is broken, the masses of the constituent elements remain in the same proportion, according to the law of constant proportions. Alternatively, in a chemical compound, the elements are always present in definite mass proportions. In simple terms, the percent composition of elements by weight in a given compound will always remain the same regardless of its source, origin, or quantity.

Example: Consider the different molecules of Oxides of Nitrogen.

In the above example of oxides of Nitrogen if we take any amount of Oxygen and Nitrogen in sample then the ratio of formed NO will always 1:1. Similarly, the ratio for NO2, N2O and N2O2 will be 1:2, 2:1 and 2:2 respectively. This is guaranteed by the law of definite proportions.

Dalton issued this law in the year 1803. This law states that ‘if two elements combine to form more than one compound, their masses in the reaction are in the ratio of small whole numbers.’

According to the law of multiple proportions, when two elements combine to form more than one compound, the mass of one element combined with a fixed mass of the other element will always be ratios of whole numbe

Carbon and oxygen combine to form two distinct compounds (under different circumstances). The first is the most common gas, CO2 (Carbon dioxide), and the second is CO (Carbon monoxide). 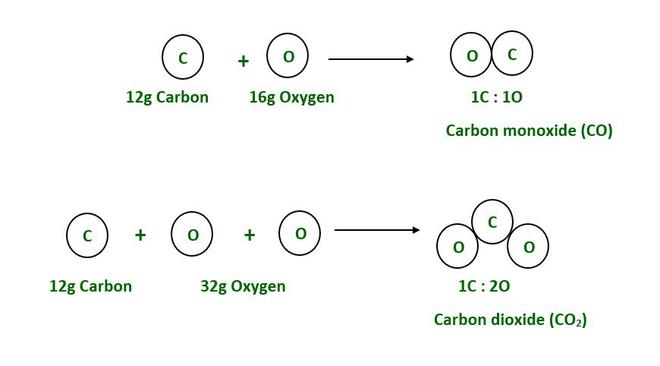 As a result, 12g of carbon combines with 32g of oxygen to form CO2.

Likewise, 12g of carbon reacts with 16g of oxygen to form CO.

Gay Lussac enacted this law based on his observations in 1808. This law states that “when gases are produced or combined in a chemical reaction, they do so in a simple volume ratio provided that all the gases are at the same temperature and pressure.”

This law is regarded as a different type of law of definite proportions. The difference between these two chemical combination laws is that Gay Lussac’s Law is stated in terms of volume, whereas the law of defini

Equivalent volumes of different gases contain the same number of molecules at the same temperature and pressure. In the above example CL2 and H₂ has 1 volume each combines to form 2 volume of HCL.