We are all aware that matter is made up of atoms. Surprisingly, Greek philosophers proposed the concept of atom in the fifth century BC (BCE). Their notion, however, was philosophical rather than scientific.

John Dalton proposed the first scientific theory of the atom. Few of Dalton’s atomic postulates were proved to be wrong later on in research by J.J. Thomson, Rutherford, Neil’s Bohr, and Schrodinger. Most of the constraints of Dalton’s theory were overcome as a result of the research, and a new hypothesis known as the modern atomic theory was proposed. The following are the major postulates of current atomic theory:

What is an Atom?

An atom is the smallest particle of an element that may or may not have an independent existence but is always present in a chemical reaction. An atom is the smallest unit of an element that retains its characteristics. An atom is made up of atoms, which cannot be created or destroyed. Distinct elements have different sorts of atoms, yet all atoms of the same element are identical. When atoms are rearranged, chemical reactions occur.

Atomic Mass and Atomic mass unit: The average mass of an atom (or a set of atoms) is equal to the sum of the masses of the electrons, neutrons, and protons. The atomic mass refers to the mass of a single atom. This is usually stated in terms of a unified atomic mass unit, as stipulated by the international agreement (AMU). The mass is 1/12 that of a carbon-12 atom in its ground state.

What is Molecular mass?

Chemistry is the study of matter’s change from one state to another. The mixing of two different forms of matter frequently results in these alterations. Certain basic laws regulate the mixing of different components to generate compounds. The laws of chemical combination are the name for these rules.

Law of Conservation of mass

This law asserts that neither matter nor energy can be generated or destroyed. To put it another way, the overall mass, which is the sum of the reacting mixture’s mass and the mass of the products generated, remains constant. In 1789, Antoine Lavoisier published this law based on the data he gathered after observing various combustion processes.

According to the law of constant composition, chemical compounds are made up of elements that are present in a given ratio based on their mass. This means that any pure sample of the compound, regardless of its source, will always contain the same type of components in the same proportion by mass. Consider the case of pure water, which would always contain hydrogen and oxygen atoms in a set mass ratio. In the ratio 1:8, one gram of water contains approximately 0.11 g hydrogen and 0.88 g oxygen.

Proust’s Law is another name for the law of definite proportions. In some compounds, it refers to the mass ratio of the elements. Consider that the number of nitrogen atoms and oxygen atoms in NO2 molecules are in a 1:2 ratio, but their mass ratio is 7:16.

From his work on sulphates, metal oxides, and sulphides, Joseph Proust, a French scientist, developed this law of constant proportions in 1794. This law has also been favoured since the introduction of Dalton’s atomic theory. In the year 1811, Jacob Berzelius, a Swedish scientist, identified the link between them. 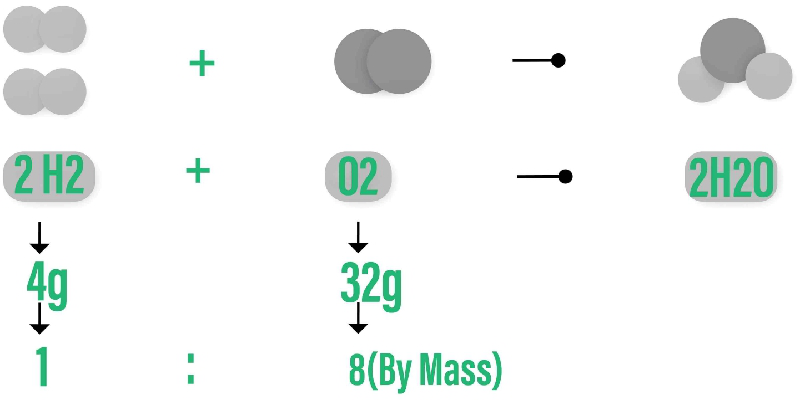 The law of definite proportions is not universally true, despite its importance in the development of modern chemistry. Non-stoichiometric substances occur, meaning their elemental makeup varies from sample to sample. The law of multiple proportion applies to such compounds. The iron oxide wustite, for example, can have between 0.83 and 0.95 iron atoms for every oxygen atom, resulting in a mass of between 23 and 25 percent oxygen. Due to crystallographic vacancies, the optimum formula is FeO, however it is closer to Fe0.95O. Proust’s measurements were not precise enough to discover such differences in general. Furthermore, an element’s isotopic composition varies depending on its source, thus even a pure stoichiometric compound’s mass contribution can fluctuate. Because astronomical, atmospheric, oceanic, crustal, and deep Earth processes may preferentially concentrate specific environmental isotopes, this variation is employed in radiometric dating. The effect is usually minor, with the exception of hydrogen and its isotopes, but it can be measured with current instrumentation. Even when “pure,” many natural polymers (such as DNA, proteins, and carbohydrates) have different compositions. Except when their molecular weight is consistent (mono-disperse) and their stoichiometry is constant, polymers are not considered “pure chemical compounds.” Due to isotope variances, they may still be breaking the law in this particular circumstance.

Exceptions to the Law of Constant Proportion

The law of constant proportion is a cornerstone of chemistry’s evolution, however it does not apply to all chemical substances and contains several exceptions. Some of the exceptions to this rule are listed below.

Example of Law of Constant Proportion

Ques-1 What are the Law of Constant Proportion’s Exceptions?

In non-stoichiometric compounds, the element ratio fluctuates from sample to sample. As a result, the law of constant proportions does not apply to these compounds. Because the masses of two different isotopes of an element differ, samples of elements with varying isotopic compositions can likewise defy the law of definite proportions. Natural polymers have also been shown to defy the proportional law.

Ques-2 Analysis revealed that a 0.24 g sample of oxygen and boron compound contained 0.096 g of boron and 0.144 g of oxygen. Calculate the compound’s % composition based on its mass.

So, Percentage of boron

So, Percentage of oxygen = Mass of Oxygen in compound Mass of compound X= 100

Ques-3 Who was the first to propose the law of definite proportions?

In the year 1779, the French scientist Joseph Louis Proust proposed the law of definite proportions for the first time. This is why the law is also referred to as Proust’s law. The French chemists Antoine Lavoisier and Joseph Priestley were the first to make the discoveries that led to this law.

Proust’s law, or the law of definite proportion, is another name for the law of constant proportion. This law asserts that any chemical compound has a fixed mass ratio of its constituent parts. It is unaffected by the technique of preparation or the source. As a result, if 1/4 of one chemical is coupled with 3/4 of another chemical to make a compound, these proportions will always be true regardless of the amount of chemicals added.

This law of constant proportion ensures that chemical compounds are formed in such a way that their proportions remain consistent no matter how much of the compound is prepared.

Ques-6 A chemical process produces 87 g of carbon dioxide gas from a 150 g baking soda mixture combining sodium bicarbonate and vinegar when heated. How much solid residue will be left in the food?

Ques-7 When it comes to atoms and molecules, what’s the difference?

An atom is a microscopic particle of a chemical element that may or may not exist independently. Molecules are the smallest unit in a complex, consisting of a group of atoms that the bond links together. Chemical bonds exist between two or more identical or different atoms.