Heat is an essential factor in phase transitions. The heat required to transform a solid to a liquid or vapor phase is known as latent heat. It is known by several names depending on its phase, such as the heat of condensation, the heat of vaporization, and so on. It can also refer to the quantity of heat energy received or emitted during a phase transition. We will look at the idea of latent heat and the latent heat formula with examples in this topic. Let’s have a look at the concept!

What is Latent Heat?

The energy or heat released or absorbed during a phase shift of a material is known as latent heat. It might be from a gas to a liquid or from a liquid to a solid and back again. 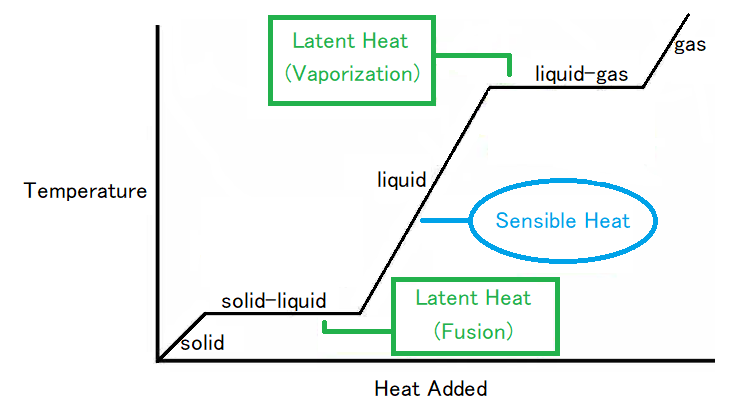 Enthalpy is a thermal attribute that is related to latent heat. However, one crucial factor to remember about latent heat is that the temperature of the material does not change. In terms of the process, latent heat is the effort required to overcome the attractive forces that hold molecules and atoms in a substance together.

When we look at the molecules at a molecular level, we can see that gaseous molecules have more vibrations than liquid ones. As a result, when we add heat to a liquid, the molecules begin to vibrate. The energy required to modify the molecular movement will be the latent heat. The latent heat value of each material is different.

The formula for latent heat is given as:

where, L is the latent heat, Q is the amount of heat released or absorbed and M is the mass of substance.

The heat Q that must be supplied or withdrawn for an object of mass m to change phases is stated in this equation. Individual latent heat is denoted by the letter L.

The unit of latent heat is J ⁄ Kg.

Latent heat has a changeable value. It is dependent on the type of phase transition that is occurring.

Let’s have a look at the many kinds of latent heat that might arise.

The heat consumed or emitted when matter melts, changing state from solid to fluid-structure at a constant temperature, is known as latent heat of fusion.

The inward energy of the fluid state is greater than that of the solid-state. This means that energy must be delivered to the solid in order to dissolve it, and energy must be removed from a fluid when it solidifies because the particles in the fluid have a more fragile intermolecular force and so have larger potential energy (a sort of bond-separation energy for intermolecular powers).

The heat consumed or expelled as matter disintegrates, changing phase from fluid to gas at a constant temperature, is known as latent heat of vaporization.

The heat of water vaporization is the most well-known. The heat of vaporization is defined as the amount of heat required to convert 1 g of a fluid into a fume without changing the fluid’s temperature. After a substance’s temperature has reached a breaking point, latent heat is necessary to change the state of the substance from fluid to gas at this point.

It’s worth noting that latent heat is associated with no change in temperature but a change in form. The disappearance of water has an obvious cooling effect, whereas the accumulation has a warming effect, due to the high heat of vaporization.

Problem 1: What are the applications of latent heat?

Some of the applications of the latent heat are given below.

Problem 2: Compute the latent heat of 20 kg substance if the amount of heat for a phase change is 600 kcal.

The formula for latent heat is given as:

Problem 4: Why do we see water droplets on the outside of an ice-cold water-filled glass?

Water vapor is known to exist in the atmosphere. As a result, as air passes through the glass, the water vapor molecule collides with the cool surface and loses energy. Because when a material loses energy, it reverts to its original condition, water vapor becomes a liquid, and we observe water droplets on the glass’s outer surface.

Problem 5: Why is ice applied to a burned area of the skin?

The temperature of the wounded skin rises as a result of the burning. When ice is brushed against the skin, the surplus heat is absorbed by the substantial latent heat of fusion of water. As a result, the wounded skin’s temperature drops, and we experience less discomfort.