An organic acid with the chemical formula C3H6O3 is Lactic acid which is also known as Milk acid. It also happens to be an alpha-hydroxyl acid because of the presence of the carboxyl group adjacent to the hydroxyl group.

Lactic acid is water-soluble and white in its solid state whereas it is colourless in its liquid state. lactic acid soluble salt like calcium lactate can be used as a source of calcium.

L-isomers are commonly present among living organisms. Lactic acid plays an important part in various biochemical processes. It is also produced by the muscles during intense activity. It is a chemical byproduct of anaerobic respiration. It gets produced in yogurt by some bacteria and is also present in your gut and blood.

An organic acid with chemical formula C3H6O3 is Lactic acid which is also known as Milk acid. It also happens to be an alpha-hydroxyl acid because of the presence of the carboxyl group adjacent to the hydroxyl group. 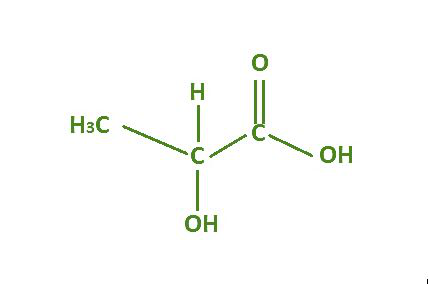 Lactic Acid can be prepared from two strategies:

First the biotechnological method: In this method, the large scale production of this acid takes place by the fermentation of carbohydrates and nutrients. This fermentation is only possible due to the microorganism of the genus Lactobacillus. This  fermentation also results in the production of formic and acetic acid.

Second synthetic method: In this method, The synthetic preparation of lactic acid takes place from carbon monoxide and acetaldehyde in acid solution. This takes place at a temperature of 130-200ºC.

Question 1: What is the Formula and IUPAC name of Lactic acid?

The chemical formula C3H6O3. Its IUPAC name is 2-Hydroxypropanoic acid

Question 2: What is the effect of lactic acid on the body?

In body, when oxygen level is low it requires the conversion glucose into energy, it makes lactic acid. This production of lactic acid can cause muscle pain, cramps and muscle fatigue. These type of symptoms are normal during physical exercise. After doing lots of physical activities or exercises, we often feel tired, fatigue, or even muscle cramps in our bodies. It is because of the accumulation of lactic acid in muscles, and When it reacts with extra oxygen that we inhale, breaking it into carbon dioxide and water. This lead to the break down of lactic acid as we get relief in cramps or muscle pain .

Lactic acid is present in sour dairy products, such as yogurt, koumiss, kefir, laban, and some cottage cheese. When milk sugar (lactose) undergoes fermentation then the product obtained is lactic acid

Question 4: What is the melting and boiling point of Lactic Acid?