They can be electrons or openings in semiconductors. The charge carriers in an electrolyte are particles, whereas they are particles and electrons in the plasma, an ionised gas. The ampere, or amp, is the SI unit of electric flow, which is defined as the passage of electric charge over a surface at a rate of one coulomb per second. The ampere is a standard SI unit of measurement. An ammeter is used to calculate the amount of electricity flowing through a circuit. Engines, generators, inductors, and transformers all use attractive fields created by electric fluxes. They generate Joule warming in conventional conductors, which produces light in glowing lights. Electromagnetic waves are produced by time-varying fluxes and are used in media communications to transmit data.

Gustav Robert Kirchhoff was a Russian-born German physicist. His job was investigating electrical conduction. Kirchhoff’s Voltage Law (KVL) and Kirchhoff’s Current Law (KCL) were published in 1845. (KCL). Kirchhoff’s Circuit Law is the result of their combination. Circuit analysis is carried out using these laws. They aid in the calculation of current flow in various streams across the network.

Note: Kirchhoff’s current law is in favour of charge conservation. As a result, a Nord or junction is a point in a circuit that does not serve as a charge source or sink.

Where n denotes the total number of branches at the node with currents flowing toward or away from it. 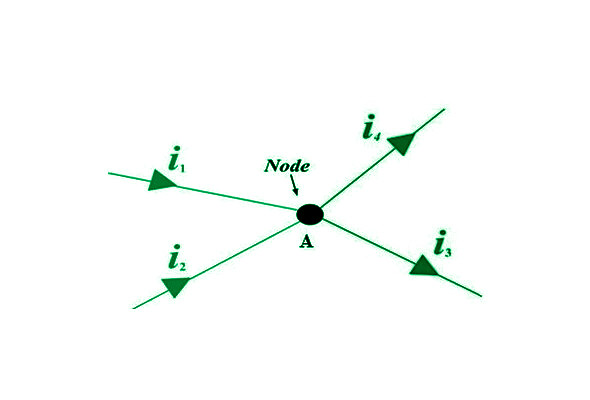 Notes: Kirchhoff’s Voltage Rule is based on the law of conservation of energy. Because the net change in the energy of a charge after it completes a closed route must be zero.

Consider a section of a resistor network with an internal closed-loop, as seen in the diagram. In the closed-loop, we wish to write the voltage decreases. The total of all voltage drops between the components linked in the loop ABCDA is zero, according to Kirchhoff’s voltage law. 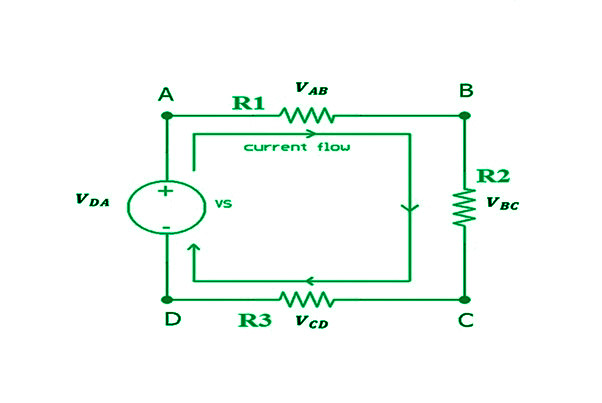 The total number of electrical components in the loop is given by n.

Also, while using KVL, we keep the same anti-clockwise or clockwise orientation from the beginning of the loop and account for all voltage decreases as negative and increases as positive. This brings us back to the initial point when the total voltage loss is zero.

Question 1: What is the rule of junction and loop?

Kirchhoff’s Loop Rule, often known as Kirchhoff’s Voltage Law, states that the sum of the voltage differences around the loop must equal zero (KVL).

Question 2: What is the definition of Node Voltage?

We’re referring about the difference in potential between two nodes in a circuit when we say node voltage. One of the nodes in the circuit is chosen as a reference node. The voltages of all other nodes are measured in respect to this single reference node.

Question 3: Find the value of I from the circuit in the figure below. 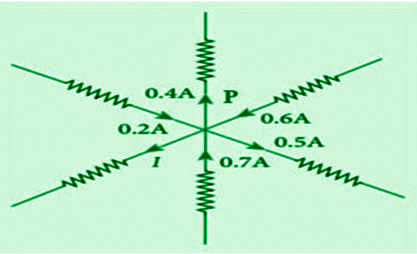 Apply Kirchhoff’s first law to the point P in the supplied circuit.

As a result, we now have the following:

Question 4: What significance does Kirchhoff’s law have?

Kirchhoff’s principles can be used to calculate the values of unknown circuit variables like current and voltage. These principles may be applied to any circuit and can be used to identify unknown values in intricate circuits and networks (with certain limits). It assists in the comprehension of energy transfer in various circuit components.

Question 5: Find the value of unknown resistance R in the circuit below using Kirchhoff’s principles, ensuring that no current flows through the 4 ohms resistance. Find the possible difference between points A and D as well. 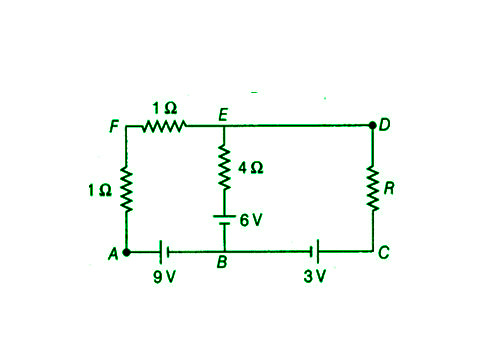 Because there is no current passing through the 4 resistor , all current going along FE will travel through ED (per Kirchhoff’s first law).

For probable variations between A and D, as well as AFD,

Question 6: Why does Kirchhoff’s law fail at high frequency?