In biology, we learn that even the smallest and most insignificant creatures have vital responsibilities to play when it comes to maintaining living beings. This is something that we come to realize as we study biology. In spite of their microscopic size and limited capabilities, the Protista are one of the groups of organisms that contribute significantly to the process of cell organisation. Ernst Haeckel, a naturalist of German descent, was the one who first introduced the idea of the kingdom Protista in the year 1866.

Protists are distinguished from other organisms in a number of ways, the most notable of which is the fact that their cell distribution is ordered, in addition to the fact that they have nuclei and organelles. It is possible that members of the kingdom Protista should be referred to as “aquatic creatures.” Since protists belong to the eukaryotic kingdom, they contain components enclosed in membranes and a nucleus clearly demarcated from the rest of the cell. 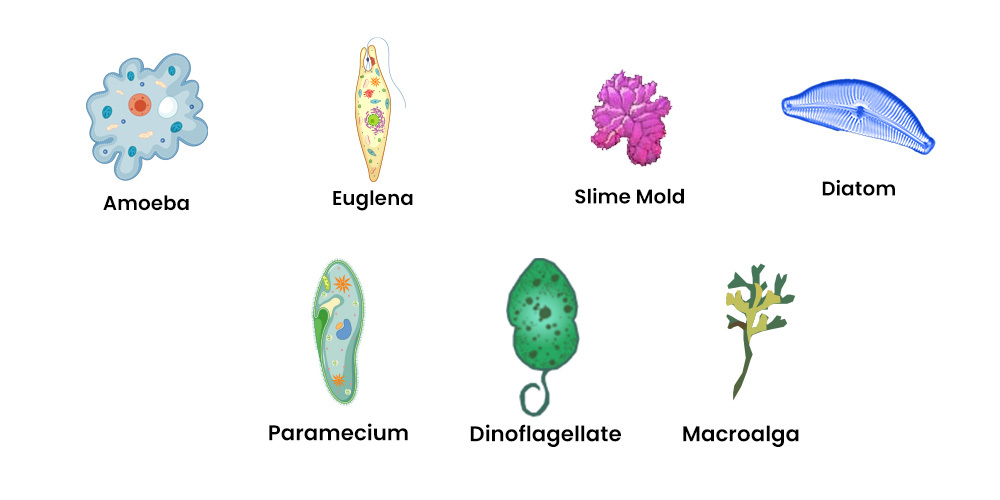 Protista: Some History and Background Information

In 1969,Robert Whittaker presented his categorisation of the world’s 5 kingdoms, and the kingdom of the Protista was one of those five kingdoms. At that time, protists were thought of as unicellular eukaryotic creatures despite their multicellular structure. However, as time progressed, the kingdom Protista grew, and it eventually became home to even multicellular species.
The creatures that are designated as belonging to this kingdom are distinguished by the fact that each and every one of those species has a simple cellular structure that is devoid of any superfluous tissues or organs. So far, scientists think that more than two lakh different types of protists have indeed been found. In point of fact, in addition to the enormous number of protists that have previously been found, there are still an extremely large number of protists that have not been found. Because protists are creatures that live in water, the majority of their habitat is comprised of aquatic environments. They are the most important producers in the ecosystem, which means they help to construct its fundamental structure. In addition to this, protists exist in a wide variety of sizes, ranging from very small creatures to enormous seaweeds that are capable of reaching heights of roughly 61 metres (about 200 ft). Protista traits and characteristics Because Protista is such a diverse kingdom, it is challenging to simplify its characteristics in a way that is consistent and captures their uniqueness. In terms of their morphology, reproductive capabilities, and dietary requirements, the creatures that belong to this kingdom exhibit a wide range of variety and complexity.

On the other hand, we may summarise the qualities that Protista has in the following manner

Some organisms may consist of just a single cell, while others may include colonial or multicellular structures.
The organisational structure of protists may vary greatly due to the fact that they belong to the kingdom of eukaryotic organisms. Protists, for example, include many organelles, such as a nucleus, mitochondria, plastids, feeding vacuoles, and flagella.

Classification of the Kingdom of Protista

The kingdom of Protista is composed of three different kinds of organisms: those that resemble plants, those that resemble fungi, and those that resemble animals. Plant-like Protists These are creatures that exhibit traits similar to those of plants and are also species capable of photosynthesis. Dinoflagellates, chrysophytes, and euglenoids are the three subtypes that fall under this category.

The class Dinophyceae is comprised of around one thousand different species of photosynthetic protists and is classified under the division Pyrrophyta.

These are unicellular and have features with both plants and animals, albeit they behave more like animals.

As a result of the fact that they have features with both animals and fungi, we collectively refer to them as fungus-animals.

These protists, also known as protozoans, are creatures that engage in heterotrophic metabolism. They are the animals’ most distant ancestors. They may be broken down into four primary categories, which are as follows:

Protists that have flagella

Protozoa that have cilia

The following is a list of the economic significance of Protista:

Protists are a large group of organisms with a nucleus that can be single-celled or have many cells. They also have parts of their cells called organelles that are very specialised and help them do different things. Most protists are free-living autotrophs, like algae, but some, like an amoeba, eat other things or are even parasites (Trypanosoma protozoa)

Question 2: What kind of living thing is Protista?

Protists are normally eukaryotes which are neither plants, animals, nor fungi. Protists have only one cell, but they can also live in groups of cells. Most of them are living in moist places on land, or even as parasites on other organisms.

Eukaryotic cells make up all protists. This means that their nucleus and other cell organelles are enclosed by a membrane.  Just about all protists lead life in water, a few  of them will be  live in  wet and moist places. Most protists are single-celled, but some, like the giant kelp, have more than one cell. They can be autotrophic or heterotrophic, and some even feed on other organisms.

Question 4: Have all Protists unicellular?

No, some Protists are multicellular. Molds and algae are both examples of protists that are made up of more than one cell. The kingdom Protista is made up of single-celled organisms like an amoeba, paramecium, and euglena.

Question 5: How does Kingdom Protista move?

Protists can move in three ways: with pseudopodia(false feet), flagella, or cilia. Many protists have flagella or cilia that they knock or sweep to move around in water.

Question 6: How do they get their energy?