According to the kinetic theory of matter, all matter is made up of microscopic particles in random motion with space between them.

Solids, liquids, gases, and plasmas: these are the four phases of matter, which are simply the many forms that matter can take. It’s interesting to note that many compounds can exist in multiple phases. Consider water: it can exist as a solid (ice), a liquid (liquid water), or a gas (water vapour).

All substances have energy which depends upon the temperature the substance is placed in. It determines whether the matter is in a solid, liquid, or gaseous state. The temperature of that particular matter is a measurement of the kinetic energy of the particles. So, we can conclude the change in the state of a matter may occur due to the change in temperature.

The energy possessed by a body due to its motion is known as kinetic energy. Kinetic theory of matter states that “Matter is made up of those substances or particles which are constantly moving.” The energy level of the particles depends upon the temperature possessed by the matter. This helps us to determine whether that matter is in a solid, liquid, or gas state. The kinetic theory of matter also gives us a description of the microscopic properties of atoms.

The main purpose of this theory is to explain the existence of matter in various phases and they change from one state to another. Kinetic theory explains that:

The kinetic molecular theory of matter describes the microscopic properties of atoms (or molecules) and their interactions, which rise to macroscopic features that may be observed (such as pressure, volume, temperature). The idea can be used to explain why matter exists in different phases (solid, liquid, and gas), as well as how matter can shift from one phase to another. According to the kinetic molecular theory of matter,

Let’s take the case of water. The water molecules in their solid-state (ice) have relatively little energy and cannot move away from each other. The molecules are arranged in a regular arrangement known as a lattice. The energy of the molecules in ice increases as it is heated. This means that certain water molecules are able to overcome the intermolecular interactions that keep them close together, allowing them to migrate further apart and produce liquid water.

The molecules in liquid water have more freedom to move than they did in the solid lattice, which is why they can flow. The liquid water will become water vapour, which is a gas if the molecules are heated further. Gas particles contain more energy and, on average, are separated from one another by distances far greater than the size of the atoms/molecules. Given the enormous distances between the particles, the attraction forces between them are quite weak. 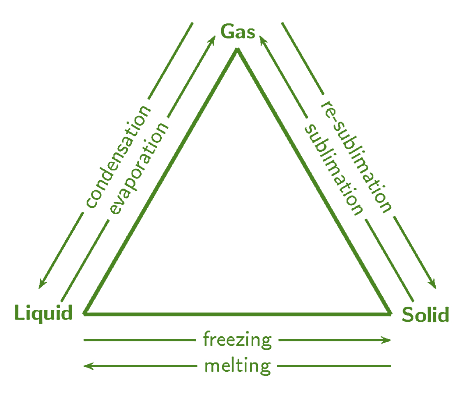 Processes to change the state of water are:

Question 1: Why does an egg sinks in salty water but floats in a normal one? Justify?

An egg sinks in salty water but floats in normal water because salty water has a higher density than an egg.

Question 2: Why was Dalton’s theory a success?

Dalton’s theory was a success because of the following points

Question 3: Why the energy levels of substances are different from each other?

The energy level of matter is different from each other because it depends upon the temperature of the substances.

Question 4: What is the study of crystals called? Define crystal.

The study of crystals is known as crystallography. A crystal is a solid substance which constituents are arranged in ordered microscopic structure and have sharp edges or ends.

Question 5: Write down the formula of the perfect gas equation and what does it describe?

The formula of the perfect gas equation is PV = μRT. This equation describes how gas behaves in a specific condition.