If one wants to accelerate an object, then one needs to apply force to it and if the applied force requires doing work. Then, after work has been done, energy must be transferred to the object which moves with a new speed. This energy transferred is known as kinetic energy, and it depends on the mass and speed of the object.

Kinetic energy can be transferred between objects and transformed into another form of energy. For example, a moving object might collide with a stationary object. Following the collision, some initial kinetic energy of the moving object might have been transferred into the stationary object or transformed into some other form of energy.

The capability to perform work is defined as Energy.

Its unit is similar to that of work, therefore, the SI unit of work or energy is equal to Joule (J).

Energy is basically classified into two main categories that are:

(i)  Kinetic Energy: The type of energy that is present in an object due to the property of its state.

(i)  Potential Energy: The type of energy that is present in an object due to the property of its motion.

e.g. a yoyo before it is released, a parked car, flowing water through a river etc.

e.g. A moving bullet, blowing wind, a speeding stone, a rotating wheel can do work.

It is something to wonder, How does a bullet pierce the target? How does the wind move the blades of a windmill? 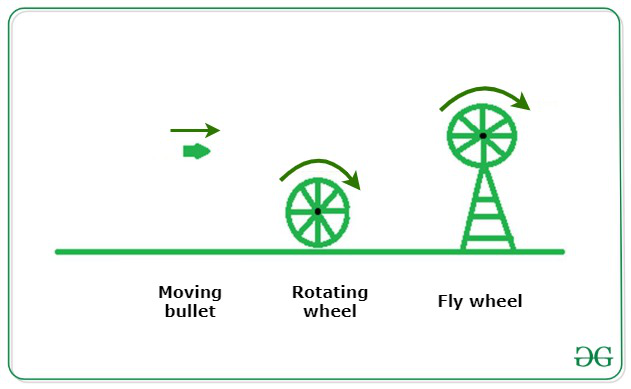 Here, m is the mass of the object and

v is the speed or velocity of the object.

While in CGS system of units, the kinetic energy is defined in erg.

Suppose when a constant force, F is applied to it, it displaces to a distance s.

Now, work is done by the object that is responsible to change in its velocity, the work done is:

Let its velocity change from u to v and a is the acceleration produced.

Now, using the equation of motion that relates u, v, s and a as:

Solve above expression for s as:

But it is known that, the net force acting on an object is defined as:

Suppose the object is starting from its initial position, i.e. u = 0, then:

There are five types of kinetic energy:

Radiant energy is a form of kinetic energy, in which it is always in motion traveling through a medium or space.

Thermal energy can be also known as heat energy. It is generated due to the motion of atoms when they collide with each other.

Sound energy is the energy, produced by the vibration of an object. It travels through the medium but cannot travel in vacuum or space, as there are no particles to act as a medium.

Electrical energy can be obtained from the free electrons that are of positive and negative charge.

The sum of kinetic energy and potential energy is called mechanical energy. It can neither be created nor destroyed but it can be converted from one form to other.

Problem 1: A vehicle having mass of 150 kg, is moving with a uniform velocity of 4 m/s. What is the amount of kinetic energy possessed by the vehicle?

The kinetic of the vehicle is,

Hence, the kinetic energy of the vehicle is equal to 1200 J.

Problem 2: A ball having a mass of 2 kg is thrown up with a speed of 10 m/s. What is the kinetic energy stored in the ball at the time of throwing?

The kinetic of the ball is,

Hence, the kinetic energy of the ball is equal to 100 J.

Problem 3: An asteroid is coming towards the earth. Its velocity is 1000 km/s. Its estimated kinetic energy is almost 4 × 1015 J. Find out the mass of the asteroid.

Since, the kinetic of the asteroid is given as,