The full-form of JSON is JavaScript Object Notation. It means that a script (executable) file which is made of text in a programming language, is used to store and transfer the data. Python supports JSON through a built-in package called json. To use this feature, we import the json package in Python script. The text in JSON is done through quoted-string which contains the value in key-value mapping within { }. It is similar to the dictionary in Python.

Argument : It takes file object as a parameter. 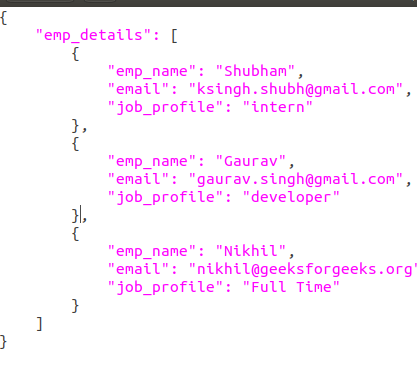 Here, we have used the open() function to read the JSON file. Then, the file is parsed using json.load() method which gives us a dictionary named data.