JavaScript is a synchronous (Moves to the next line only when the execution of the current line is completed) and single-threaded (Executes one command at a time in a specific order one after another serially) language. To know behind the scene of how JavaScript code gets executed internally, we have to know something called Execution Context and its role in the execution of JavaScript code.

Execution Context: Everything in JavaScript is wrapped inside Execution Context, which is an abstract concept (can be treated as a container) that holds the whole information about the environment within which the current JavaScript code is being executed.

Now, an Execution Context has two components and JavaScript code gets executed in two phases.

Let’s see the whole process through an example.

In the above JavaScript code, there are two variables named number and newNumber and one function named Square which is returning the square of the number. So when we run this program, Global Execution Context is created.

So, in the Memory Allocation phase, the memory will be allocated for these variables and functions like this.

In the Code Execution Phase, JavaScript being a single thread language again runs through the code line by line and updates the values of function and variables which are stored in the Memory Allocation Phase in the Memory Component.

As we can see, the values are assigned in the memory component after executing the code line by line, i.e. number: 2, res: 4, newNumber: 4.

Call Stack: When a program starts execution JavaScript pushes the whole program as global context into a stack which is known as Call Stack and continues execution. Whenever JavaScript executes a new context and just follows the same process and pushes to the stack. When the context finishes, JavaScript just pops the top of the stack accordingly. 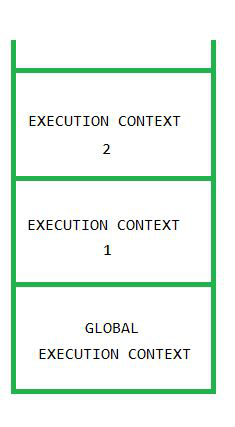 When JavaScript completes the execution of the entire code, the Global Execution Context gets deleted and popped out from the Call Stack making the Call stack empty.