Java Program to Use Exceptions with Thread

Lifecycle of a thread: The class implements a Thread class or Runnable interface then the extended class has start() method run the thread, sleep() methods cause the currently executing thread to sleep for the specified number of milliseconds, and many more. 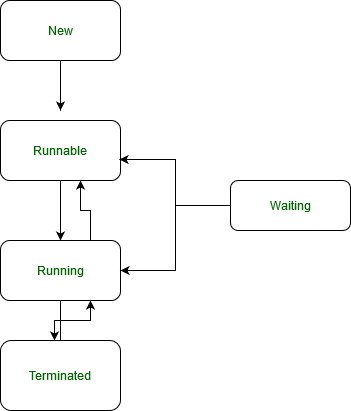 Prior to discussing the approaches, state. transactions of thread should be known to further deal with exceptions for better understanding. A thread in Java at any point in time exists in any one of the following states. A thread lies only in one of the shown states at any instant: 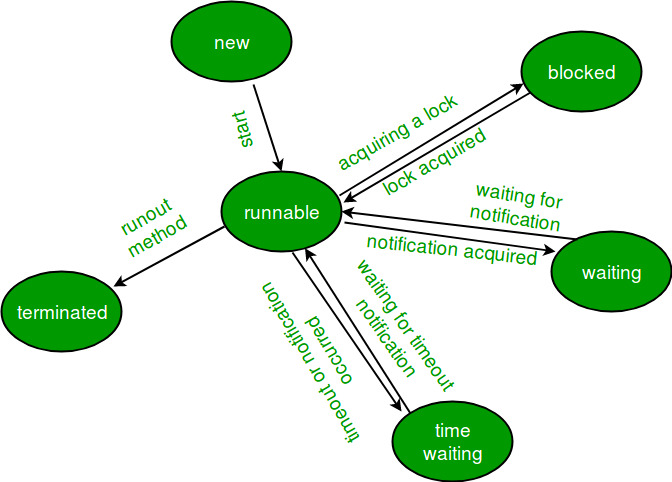 1. A class name RunnableThread implements the Runnable interface which gives the run( ) method executed by the thread. The object of this class is now runnable

2. The Thread constructor is used to create an object of RunnableThread class by passing the runnable object as a parameter.

3. The start() method is invoked on the Thread object as it returns immediately once a thread has been spawned.

4. The thread ends when the run( ) method ends which is to be normal termination or caught exception.

5. Now in order to create a new thread

6. In order to start the new thread.

7. public void run( ) is an overrideable method used to display the information of a particular thread.

8. Thread.currentThread().sleep(2000) is used to deactivate the thread until the next thread started execution or used to delay the current thread.

Uncaught exception handler will be used to demonstrate the use of exception with thread. It is a specific interface provided by Java to handle exception in the thread run method.

There are two methods to create a thread:

2. Exception handling with sleep method(): sleep() method of thread class is used where there is a demand to sleep the thread for a particular period of time for the proper workflow of the code.

Return type: As seen in syntax itself, it does not return any value.

Exception: It does often throws out exceptions as java language being involving the concept of multithreading