Java Applet is a special type of small Java program embedded in the webpage to generate dynamic content. The specialty of the Java applet is it runs inside the browser and works on the Client side (User interface side).

The Applet class provides a standard interface between applets and their environment. The Applet class is the superclass of an applet that is embedded in a Web page or viewed by the Java Applet Viewer. The Java applet class gives several useful methods to give you complete control over the running of an Applet. Like initializing and destroying an applet, It also provides ways that load and display Web Colourful images and methods that load and play audio and Videos Clips and Cinematic Videos.

In Java, there are two types of Applet

How to run an Applet?

There are two ways to execute a Java Applet:

1. void init():  This init() method is the first method of a java applet. This is used to initialize the applet when the applet begins to execute

2. void start(): void start() this method is called automatically after the init() method, and it is used to start the Applet and to implementation of an applet

Other Methods in Applet Class:

5. System.out.println(String): This Method Works from appletviewer, as not from browsers, and it Automatically opens an Output window.

6. ShowStatus(String): This Method Displays the String in the Applet’s status line, and each call overwrites the previous call, and You have to allow time to read the line.

7. String getParameter(String ParameterName): It Returns the value of a parameter defined in a Current Applet.

8. Image getImage(URL url): This method returns an Image object which contains an image specified at its location, url.

9. void play(URL url): This method can play an audio clip found at the specified location, url.

10. setStub: It sets this applet’s stub, which is done automatically by the system.

11. isActive: This method Determines if this current applet is active. Then Applet is marked active just before its start method is invoked. Then It becomes inactive immediately after its stop method when it is initialized.

Applet() – It Constructs a new Applet.

By using Appletviewer, type the following command at the command prompt- 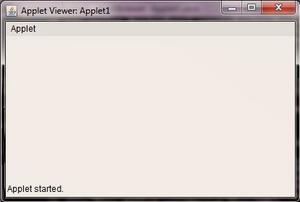