Introduced in Java 8, the Stream API is used to process collections of objects. A stream is a sequence of objects that supports various methods which can be pipelined to produce the desired result. Before proceeding further let us discuss out the difference between Collection and Streams in order to understand why this concept was introduced.

If we want to use the concept of streams then stream() is the method to be used. Stream is available as an interface.

Let us now start with the basic components involved in streams. They as listed and as follows:

Before moving ahead in the concept consider an example in which we are having ArrayList of integers, and we suppose we apply a filter to get only even numbers from the object inserted.

How does Stream Work Internally?

Output explanation: In our collection object, we were having elements entered using the add() operation. After processing the object in which they were stored through streams we impose a condition in the predicate of streams to get only even elements, we get elements in the object as per our requirement.  Hence, streams helped us this way in processing over-processed collection objects. 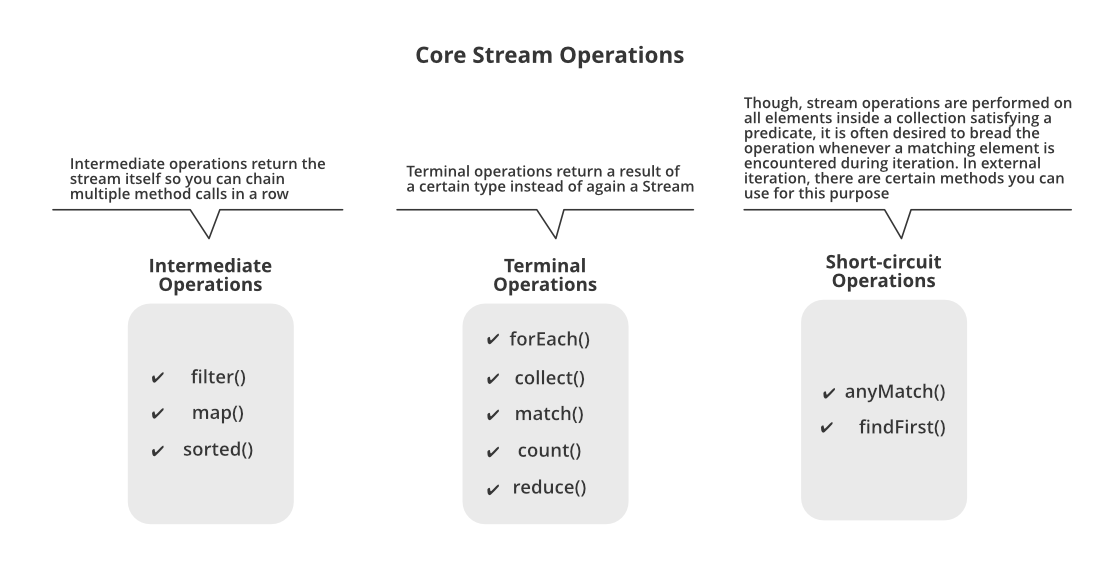 There are broadly 3 types of operations that are carried over streams namely as follows as depicted from the image shown above:

All three of them are discussed below as they go hand in hand in nearly most of the scenarios and to provide better understanding by using them later by implementing in our clean java programs below. As we already have studied in the above example of which we are trying to filter processed objects can be interpreted as filter() operation operated over streams. Later on from that processed filtered elements of objects, we are collecting the elements back to List using Collectors for which we have imported a specific package named java.util.stream with the help of Collectors.toList() method. This is referred to as collect() operation in streams so here again we won’t be taking an example to discuss them out separately.

Note: For every object if there is urgency to do some operations be it square, double or any other than only we need to use map() function  operation else try to use filter() function operation.

Now geeks you are well aware of ‘why’ streams were introduced, but you should be wondering out ‘where’ to use it. The answer is very simple as we do use them too often in our day-to-day life. Hence, the geek in simpler words we say directly land p on wherever the concept of the collection is applicable, streams concept can be applied there.

Example 1: In general, daily world, whenever the data is fetching from the database, it is more likely we will be using collection so there itself streams concept is must apply to deal with processed data.

Now we will be discussing out real-time examples to interrelate streams in our life. Here we will be taking the most widely used namely as follows:

Example 2: Streams in a Grocery store 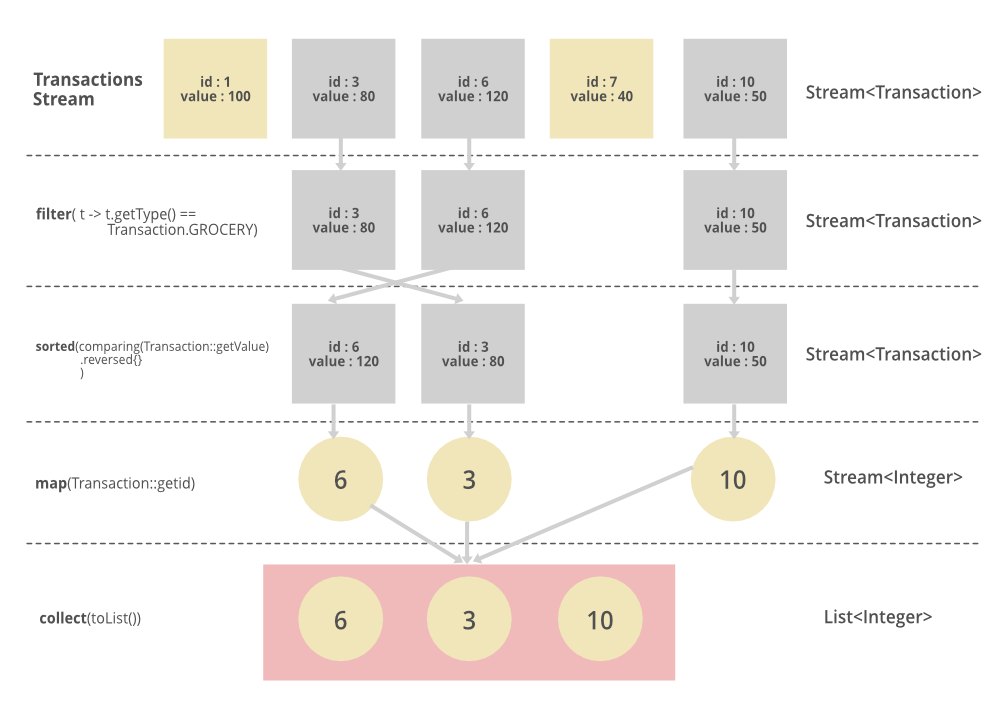 The above pictorial image has been provided is implemented in streams which is as follows:

Similarly, we can go for another widely used concept that is our dealing with our mobile numbers. Here we will not be proposing out listings, simply will be demonstrating how the stream concept is invoked in mobile networking by various service providers across the globe.

Collection can hold any number of object so let ‘mobileNumber’ be a collection and let it be holding various mobile numbers say it be holding 100+ numbers as objects. Suppose now the only carrier named ‘Airtel’ whom with which we are supposed to send a message if there is any migration between states in a country. So here streams concept is applied as if while dealing with all mobile numbers we will look out for this carrier using the filter() method operation of streams. In this way, we are able to deliver the messages without looking out for all mobile numbers and then delivering the message which senses impractical if done so as by now we are already too late to deliver. In this way these intermediate operations namely filter(), collect(), map() help out in the real world. Processing becomes super simpler which is the necessity of today’s digital world.

Hoper by now you the users come to realize the power of streams in java as if we have to do the same task we do need to map corresponding to every object, increasing in code length, decreasing optimality of our code. With the usage of streams, we are able to in a single line irrespective of elements contained in the object as with the concept of streams we are dealing with the object itself.

Note: filter, sorted, and map, which can be connected together to form a pipeline.