The numbers we usually study and have been concerned about up until now are the positive whole numbers, 1,2,3, and so on, used for counting. These are called natural numbers and have been with us for so many millennia.

“God created the natural numbers; all the rest is the work of man.”

Then, the basic necessities of life led to the creation of fractions like 3/4, 1/5, and so on. These numbers were called rational numbers.

All of these numbers can be represented at a particular position in the number line.

But around 2500 years ago, Greeks discovered something else while studying geometry. They noticed to their surprise that there were some numbers which they couldn’t express as ratio whole numbers. 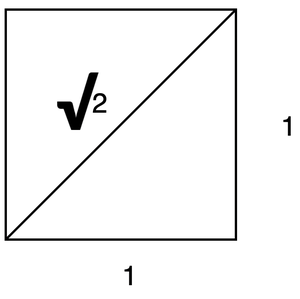 They noticed while making a square of side length unit 1. The length of the diagonal cannot be represented by any ratio of whole numbers.

In modern mathematical terms, such a number is called an irrational number. Geometrically it means that there is no common unit (however small it may be), such that the side and diagonal of the square are a whole number multiple of it. Similarly, the circumference of a circle is an irrational multiple of diameter. That multiple is “pi”.

Another clue in recognizing an irrational number is that the decimal goes on without repeating.

Is √2 an Irrational number?

To begin with, let’s suppose it is a Rational Number

Since it is Rational, It can be represented in the most simplified form P/Q where P/Q are Integers (Q≠ 0) and P/Q can not be further simplified,

Which means that the fraction P/Q is irreducible.

Here, It is clear that P2 is divisible by 2. Therefore, P2 is an Even Number.

Since, P2 is Even, P has to be an Even number too.

Therefore, P can be written as 2A as it is divisible by 2.

Here, It is observed that Q2 is also an Even number as it is divisible by 2.

Since Q2 is Even, Q has to be Even too. Therefore, Both P and Q turned out to be Even numbers, which means they can be Simplified further.

It is a Contradiction as it was already defined to be a fraction in its simplest form.

Therefore, √2 cannot be Rational, It is an Irrational number.

Addition of an Irrational and Rational number:

We want to know if z = xy is irrational or rational ?

This will be proved by contradiction. Let’s assume z is rational number.

When multiplying a rational number, it is not necessary that the resulting number is always irrational.

The answer to this is also similar to the above property. The Sum of two irrational numbers is sometimes rational sometimes irrational.

But followers of Pythagoras could not accept the existence of irrational numbers, and it is said that Hippasus was drowned at sea as a punishment from the gods!

Let’s take a circle, measure its circumference, and divide it by its diameter. It will always be a constant if measured accurately.

This constant ratio is denoted by the greek symbol

It is an important universal constant, it occurs at lots of places in our universe and daily lives. It was not created by humans, it was discovered. We discovered one of the places where pi occurred, it was geometry.

So, what is the value of Pi?

It is not infinite, it is an irrational number.

as value of Pi, but it is an approximation.

Actually, no one can encounter such a case, if the diameter is measured and it is rational. Then circumference must be irrational and vice versa. So either diameter or circumference. One of them will always be irrational. Usually, the measuring instruments are not precise enough. If there existed a perfect measuring scale, it would tell that at least one of the numbers in the fraction is irrational.

Some Sample Problems on Irrational Numbers

These numbers mentioned above are not Irrational number.

Question 2: “Every real number is an irrational number”. True or False?

Question 3: Determine whether the following numbers are Rational or Irrational.

Question 4: Why Integers are not Irrational numbers?

Integers (Either Positive, Negative or Zero) are not Irrational but Rational numbers since they can be represented in the simplest fraction form P/Q (where Q ≠ 0).