Encapsulation :
In simple terminology, Encapsulation is basically the process of adding a new packet within the existing packet. Destination Address field. In network communication, the packet is the smallest unit of information, and the basic packet contains the information of header which is important while communication, the basic packet contains information of both sender and receiver header. On the sending system, when protocol, added data to the packet header then the process called data encapsulation. Hence, we can term encapsulation the act of packaging data or adding each layer’s header to the actual data. So, when data gets at the Transport layer, it is no longer called data, it is rather termed as a segment in Networking Terminology. Also, when the segment gets at the Network layer, it is no longer called a segment, it is rather termed as a packet.

Encapsulation in Network Protocols :
For Instance, let’s assume that we have an IPv6(Internet Protocol Version 6). So whenever, this packet reaches the router where the router supports only IPv4(Internet Protocol Version 4). Now there is no way that the information is transmitted. This is where the IP in IP Encapsulation comes into the picture. With the use of this Encapsulation process, we can add a new packet within the existing one so that the information is passed efficiently.

Process of Encapsulation :
Firstly, take the IPv6 packet which is receiving, and since the router does not support IPv6, we take that receiving packet, and then on the top of the received packet, we wrap with a new packet which is called IPv4. Here, we are not touching the IPv6 address. We are just keeping it intact and since the router supports only IPv4, we are adding a new IP 20-byte header wherein we will be having a 32 bit IP address for Source and Destination. This is the process of IP-in-IP Encapsulation. 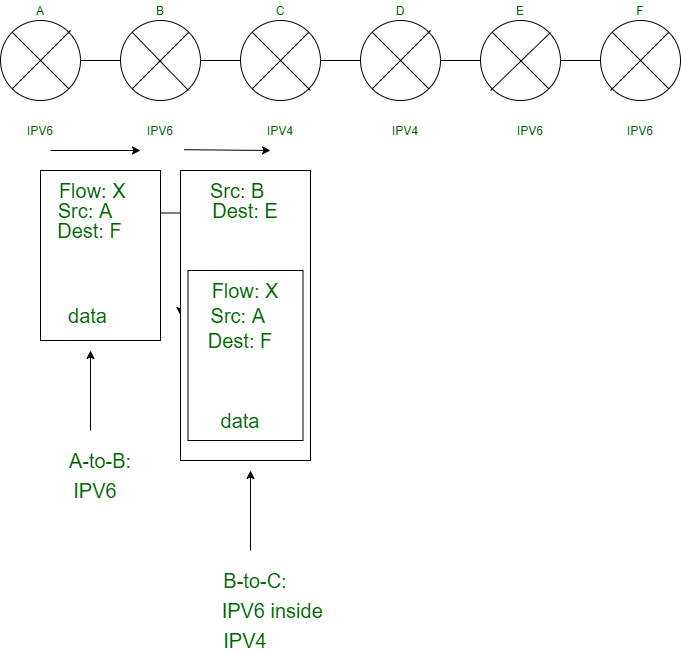