Metals are minerals or substances that naturally occur beneath the Earth’s surface. The majority of metals are glossy or gleaming. Metals are inorganic, meaning they are formed of materials that have never been alive. Metals are natural components of the earth’s crust that are present in the form of metal ores and are related to each other as well as a variety of other elements. They’re also found in the rocks washed by surface and groundwater, as well as in air dust. Non-metals are substances that receive or gain electrons in order to produce negative ions. Non-metals often have 4, 5, 6, or 7 electrons in their outermost shell.

Non-metals are materials that don’t have all of the properties that metals have. They’re great at insulating heat and electricity. Typically, they are gases, but they can also be liquids. At room temperature, carbon, sulphur, and phosphorus, for example, are solid.

What is an Ionic Bond?

The ionic bond is the electrostatic force of attraction that holds two oppositely charged ions together.

The complete transfer of one or more electrons from one atom to the other forms a chemical link between two atoms, causing the atoms to acquire their closest inert gas configuration. There are three main ways for two atoms to unite in order to shed energy and become stable. One option is to complete their octet arrangement by donating or accepting electrons. An ionic bond, also known as an electrovalent bond, is created by this type of combination.

The following qualities are found in ionic bonded molecules due to the presence of a strong force of attraction between cations and anions:

e.g. The formation of sodium chloride takes place as shown below:

What are Ionic Compounds?

Ions with opposing charges are closely packed to create crystalline solids. When metals react with non-metals, ionic compounds are created.

Ionic compounds are ionic compounds that have ionic bonds that bind them together. Elements can gain or lose electrons in order to obtain their closest noble gas configuration. Their stability is aided by the creation of ions for the completion of the octet (either by receiving or losing electrons).

In a reaction between metals and non-metals, metals lose electrons to complete their octet, whereas non-metals receive electrons to complete their octet. When metals and nonmetals react, ionic compounds are created. Crystalline solids are made up of ions with opposite charges packed close together. Ionic compounds are formed when metals react with nonmetals.

Ionic molecule’s structure is determined by the relative sizes of its cations and anions. The majority of inorganic compounds, including salts, oxides, hydroxides, and sulphides, are ionic compounds. Ionic solids are held together by the electrostatic interaction of positive and negative ions.

Chloride ions attract sodium ions, and sodium ions attract chloride ions. As a result, Na+ and Cl– ions alternate in a three-dimensional framework. The crystal in this picture is sodium chloride. The crystal is uncharged because the amount of sodium ions is equal to the number of chloride ions. The forces of attraction that exist between the ions keep them in place. A large ion structure is formed by the ionic interactions between the charged particles. Breaking all of the links in these huge complexes takes a lot of energy because the ions are tightly bonded. As a result, ionic compounds have high melting and boiling points.

Example of an Ionic Compound 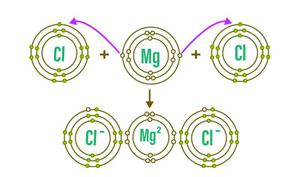 Question 1: Is it feasible for two nonmetals to make ionic connections?

Question 2: Why are the melting points of ionic compounds so high?

Question 3: What are the two elements that make up an ionic compound?

Ionic compounds are made up of ions, which are charged particles that occur when an atom (or group of atoms) acquires or loses electrons. An anion is a negatively charged ion, while a cation is a positively charged ion.

Question 4: How do you break ionic bonds?

Because ionic compounds are polar, they dissolve in polar solvents like water. Polar solvents breakdown ionic bonds by disrupting them. The ionic bonds can be disrupted by dissolving the ionic material in water.

Question 5: What are some examples of common ionic compounds?

With high melting and boiling temperatures, ionic compounds appear to be both robust and fragile. Ions can be simple groupings of atoms, such as sodium and chlorine in table salt (sodium chloride), or more complex groupings, such as calcium carbonate.