Solidity is a brand-new programming language created by the Ethereum which is the second-largest market of cryptocurrency by capitalization, released in the year 2015 led by Christian Reitwiessner. Some key features of solidity are listed below:

Ethereum is a decentralized open-source platform based on blockchain domain, used to run smart contracts i.e. applications that execute the program exactly as it was programmed without the possibility of any fraud, interference from a third party, censorship, or downtime. It serves a platform for nearly 2,60,000 different cryptocurrencies. Ether is a cryptocurrency generated by ethereum miners, used to reward for the computations performed to secure the blockchain.

Ethereum Virtual Machine abbreviated as EVM is a runtime environment for executing smart contracts in ethereum. It focuses widely on providing security and execution of untrusted code using an international network of public nodes. EVM is specialized to prevent Denial-of-service attack and confirms that the program does not have any access to each other’s state, also ensures that the communication is established without any potential interference.

Smart contracts are high-level program codes that are compiled to EVM byte code and deployed to the ethereum blockchain for further execution. It allows us to perform credible transactions without any interference of the third party, these transactions are trackable and irreversible. Languages used to write smart contracts are Solidity (a language library with similarities to C and JavaScript), Serpent (similar to Python, but deprecated), LLL (a low-level Lisp-like language), and Mutan (Go-based, but deprecated).

Example: In the below example, we have discussed a sample solidity program to demonstrate how to write a smart contract in Solidity. 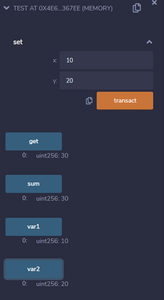 State variables are permanently stored in contract storage that they are written in Ethereum Blockchain. The line uint public var1 declares a state variable called var1 of type uint (unsigned integer of 256 bits). Think of it as adding a slot in a database. Similarly, goes with the declaration uint public var2 and uint public sum.

How to Execute The Code:

There are practically two ways to execute a solidity smart contract:

1. Offline Mode: Running a solidity smart contract in Offline mode requires three prerequisites and 4 major steps to be followed to get the smart contract running:

2. Online Mode: Remix IDE is generally used to compile and run Solidity smart contracts in the Online Mode. You can find the complete articles with all the steps here.