Introduction to Power Analysis in Python

The p-value is compared to the significance level,

(specified before the experiment, and its value depends on the kind of experiment and business requirements). Typical significance level measures are 0.10 or 10%, 0.05 or 5%, and 0.01 or 1%.

All statistical hypothesis tests have a chance of making either of the following types of errors:

The last concept that you need to be aware of before proceeding to statistical power analysis is the effect size. It is the quantified magnitude of a result or effect present in a population of an experiment, usually measured by a specific statistical measure such as Pearson’s correlation or Cohen’s d for the difference in the means of two groups. The commonly accepted small, medium, large, and very large effect sizes for Cohen’s d are 0.20, 0.50, 0.80, and 1.3 respectively. The effect size or ‘expected effect’ is ascertained from pilot studies, findings from similar studies, field-defined effect, or an educated guess.

Power analysis: It is built from 4 variables, namely, Effect Size, Significance level, Power, Sample Size. All these variables are interrelated in the sense that changing one of them impacts the other three. Following this relationship, power analysis involves determining the fourth variable when the other three variables are known. It is a powerful tool for experimental design. For example, prior to an experiment, the sample size needed to detect a particular effect can be estimated given different desired levels of significance, effect size, and power. Alternatively, a study’s findings can be validated. Statistical power can be determined, by using the given sample size, effect size, and significance level, consequently helping to conclude whether the probability of committing a Type II error is acceptable from a decision-making perspective.

The stats.power module of the statsmodels package in Python contains the required functions for carrying out power analysis for the most commonly used statistical tests such as t-test, normal based test, F-tests, and Chi-square goodness of fit test. It’s solve_power function takes 3 of the 4 variables mentioned above as input parameters and calculates the remaining 4th variable.

Consider a Student’s t-test, which is a statistical hypothesis test for comparing the means from two samples of Gaussian variables. In a pilot study with the two groups of variables, N1 = 4, Mean1 = 90, SD1 = 5; N2  = 4, Mean2 = 85, SD2 = 5. The assumption, or null hypothesis, of the test, is that the sample populations have the same mean. Since alpha is usually set to 0.05 and power to 0.80, the researcher primarily needs to be concerned with the sample size and the effect size. Let’s determine the sample size needed for the test in which a power of 80% is acceptable, with the significance level at 5% and the expected effect size to be found using the pilot study.

First, import the relevant libraries. Calculate the effect size using Cohen’s d. The TTestIndPower function implements Statistical Power calculations for t-test for two independent samples. Similarly, there are functions for F-test, Z-test and Chi-squared test. Next, initialize the variables for power analysis. Then using the solve_power function, we can get the required missing variable, which is the sample size in this case.

So, the suggested minimum number of samples in each group required is 17 to have a significant p-value in the t-test. If we proceed and use an inferential t‐test before the power analysis, we may find a non‐significant p‐value even though there is a large effect, likely due to the small sample size (4).

Alternatively, we can test the power of a specific proposed sample size.

This tells us that a minimum sample size of 40 would result in a power of 0.87.

We can also plot power curves. Power curves are line plots that show how the change in effect size and sample size impact the power of the statistical test. The plot_power() function can be used to create power curves. ‘dep_var‘ argument specifies the dependent variable (x-axis) and can be ‘nobs’, ‘effect_size’ or ‘alpha’. Here, ‘nobs’ is the sample size and takes in array values. Due to this, one curve is created for each value of effect size.

Let’s assume a significance level of 0.05 and explore the change in sample size between 5 and 100 with Cohen’s d standard low, medium, and high effect sizes. 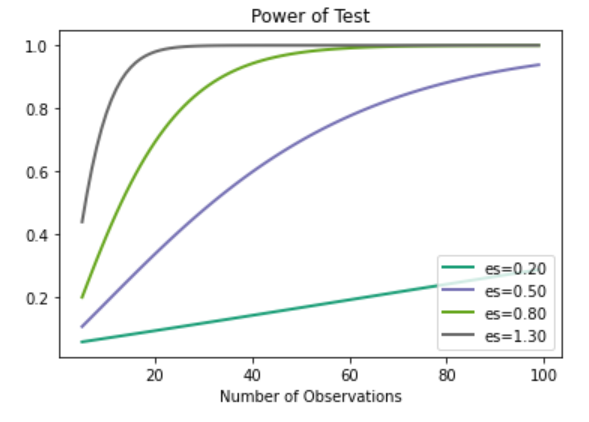