LESS is a simple CSS pre-processor that makes it possible to create manageable, customizable, and reusable style sheets for websites. LESS is a dynamic style sheet language that increases the working power of CSS. LESS is cross-browser compatible. CSS pre-processor is a scripting language that improves CSS and gets compiled into regular CSS syntax so that the web browser can use it. This also provides functionalities like variables, functions, mixins, and operations that enable us to build dynamic CSS.

LESS was originally designed by Alexis Sellier in the year 2009. LESS is an open-source language easy to learn and understand. The very first version of LESS was written in Ruby. While, in the next versions, the use of Ruby was replaced by a more simple language JavaScript.

Let’s see some examples of less-

Example 1: The following example demonstrates the use of less –

Next, create the less file-

To compile the less file to a CSS file, write the following command.

Execute the above command, it will create the “style.css” file automatically with the following code. 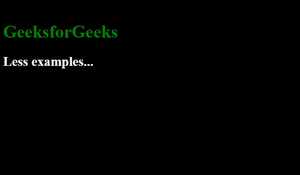 Example 2: The following example demonstrates the use of mixin in less –

To compile the less file to a CSS file, write the following command.

Execute the above command, it will create the “style.css” file automatically with the following code. 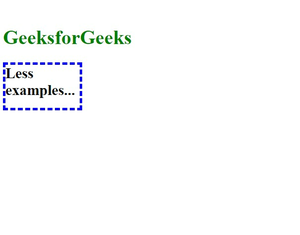 Previous
PHP | IntlChar::isspace() Function
Next
Web Server and Its Type
Related Articles
1. How to create a LESS file and how to compile it ?
2. How to import LESS through npm ?
3. JavaScript RangeError - Repeat count must be less than infinity
4. How to create Show More and Show Less functionality for hiding text using JavaScript ?
5. What are nested rules in LESS ?
6. What are the differences between LESS and SASS ?
7. How to represent a variable in Less ?
8. How to create a loop structure in LESS ?
9. What is the use of operations in LESS ?
10. How to pre-compile LESS into CSS ?
Article Contributed By :