Before getting into Bootstrap plot, let us first understand what Bootstrapping (or Bootstrap sampling) is all about.

Bootstrap Sampling: It is a method in which we take a sample data repeatedly with replacement from a data set to estimate a population parameter. It is used to determine various parameters of a population.

Bootstrap plot: It is a graphical method used to measure the uncertainty of any desired statistical characteristic of a population. It is an alternative to the confidence interval. (also a mathematical method used for calculation of a statistic).

Need for a Bootstrap plot:

Suppose, we have 5000 people in a park, and we need to find the average weight of the whole population. It is not feasible to measure the weight of each individual and then take an average of that. This is where bootstrap sampling comes into the picture.

What we do is, we take groups of 5 people randomly from the population and find its mean. We do the same process say 8-10 times. This way, we get a good estimate of the average weight of the population more efficiently.

Let us consider an example and understanding how the Bootstrap plot makes it easier to obtain critical information from a large population. Say we have a sample data of 3000 randomly generated uniform numbers. We take out a sub-sample of 30 numbers and find its mean. We do this again for another random sub-sample and so on. 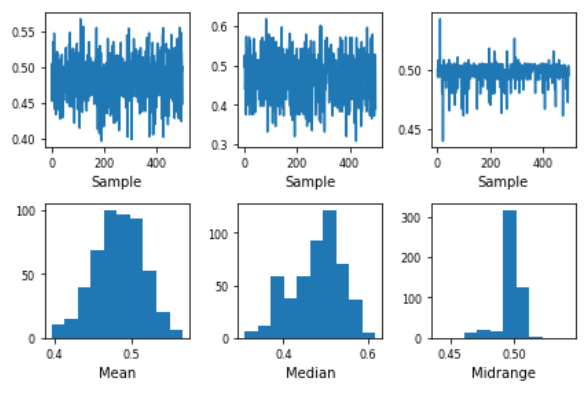