Backtracking is an algorithmic technique for solving problems recursively by trying to build a solution incrementally, one piece at a time, removing those solutions that fail to satisfy the constraints of the problem at any point in time (by time, here, is referred to the time elapsed till reaching any level of the search tree).  Backtracking can also be said as an improvement to the brute force approach. So basically, the idea behind the backtracking technique is that it searches for a solution to a problem among all the available options.  Initially, we start the backtracking from one possible option and if the problem is solved with that selected option then we return the solution else we backtrack and select another option from the remaining available options. There also might be a case where none of the options will give you the solution and hence we understand that backtracking won’t give any solution to that particular problem. We can also say that backtracking is a form of recursion. This is because the process of finding the solution from the various option available is repeated recursively until we don’t find the solution or we reach the final state. So we can conclude that backtracking at every step eliminates those choices that cannot give us the solution and proceeds to those choices that have the potential of taking us to the solution.

According to the wiki definition,

Backtracking can be defined as a general algorithmic technique that considers searching every possible combination in order to solve a computational problem.

There are three types of problems in backtracking –

How to determine if a problem can be solved using Backtracking?

Generally, every constraint satisfaction problem which has clear and well-defined constraints on any objective solution, that incrementally builds candidate to the solution and abandons a candidate (“backtracks”) as soon as it determines that the candidate cannot possibly be completed to a valid solution, can be solved by Backtracking. However, most of the problems that are discussed, can be solved using other known algorithms like Dynamic Programming or Greedy Algorithms in logarithmic, linear, linear-logarithmic time complexity in order of input size, and therefore, outshine the backtracking algorithm in every respect (since backtracking algorithms are generally exponential in both time and space). However, a few problems still remain, that only have backtracking algorithms to solve them until now.

Consider a situation that you have three boxes in front of you and only one of them has a gold coin in it but you do not know which one. So, in order to get the coin, you will have to open all of the boxes one by one. You will first check the first box, if it does not contain the coin, you will have to close it and check the second box and so on until you find the coin. This is what backtracking is, that is solving all sub-problems one by one in order to reach the best possible solution.

Consider the below example to understand the Backtracking approach more formally,

Given an instance of any computational problem

corresponding to the instance, all the constraints that need to be satisfied in order to solve the problem are represented by

. A backtracking algorithm will then work as follows:

The Algorithm begins to build up a solution, starting with an empty solution set

The desired solution X to a problem instance P of input size n is as a vector of candidate solutions that are selected from some finite set of possible solutions S.

Constraints are the rules to confine the solution vector (X1, X2…… Xa).

They determine the values of candidate solutions and their relationship with each other. There are two types of constraints:

These are the rules that identify the tuples in the solution space S that satisfy the specified criterion function of a problem instance P. They give the directives of relating all candidate solutions x’s to each other.

E.g., in the case of the N-queens problem, all xi’s must be distinct satisfying the criterion function of non- attacking queens, in the case of the 0/1 knapsack problem all x’s with value ‘I’ must represent the item giving overall maximum profit and having total weight S knapsack capacity.

These are the rules by which all candidate solutions x_{i} ^ prime s are restricted to take on values only from a specified set in a problem instance P. Explicit constraints vary with the instances of the problem.

A representation of the solution space S of a problem instance P in the form of a tree is defined as the state space tree.

It facilitates systematic search in the solution space to determine the desired solution to a problem.

A solution space of a given problem can be represented by different state space trees.

The state space of a problem is described by all paths from a root node to other nodes in a state space tree.

Each node in a state space tree describes a problem state or a partial solution formed by making choices from the root of the tree to that node.

In a state space tree for a fixed tuple size, only the leaf nodes are solution states.

These are the solution states that satisfy the implicit constraints.

A node is promising if it eventually leads to the desired solution.

A promising node corresponds to a partial solution that is still feasible.

Any time the partial node becomes infeasible, that branch will no longer be pursued.

A node is non-promising if it eventually leads to a state that cannot produce the desired solution. A non-promising node corresponds to a partial solution that shows infeasibility to get a complete solution.

Such nodes are killed by a bounding function without further exploration.

It is a live node whose children are currently being generated.

A node that is either not to be expanded further or for which all its children have been generated is known as a dead node.

Here, the latest live node becomes the next E-node.The moment a new child of the current E-node is generated, that child will be the new E-node. In backtracking, a state space tree is constructed by using the depth first node generation approach.

It is an optimization function B(x1, x2. Xa) which is to be either maximized or minimized for a given problem instance P.

It optimizes the search of a solution vector (X1, X2,… Xn) in the solution space S of a problem instance P.

It helps to reject the candidate solutions not leading to the desired solution to the problem. Thus, it kills the live nodes without exploring their children if constraints are not satisfied.

Eg, in the case of the knapsack problem, the criterion function is the maximization of the profit by filling a knapsack.

These are the state space trees whose tree formulation is independent of the problem instance being solved.

These are the state space trees whose tree formulation varies with the problem instance being solved.

Difference between Recursion and Backtracking:

In recursion, the function calls itself until it reaches a base case. In backtracking, we use recursion to explore all the possibilities until we get the best result for the problem.

2. Finding whether a solution exists or not

Let us try to solve a standard Backtracking problem, N-Queen Problem.
The N Queen is the problem of placing N chess queens on an N×N chessboard so that no two queens attack each other. For example, following is a solution for 4 Queen problem. 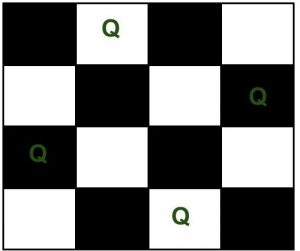 The expected output is a binary matrix which has 1s for the blocks where queens are placed. For example, following is the output matrix for the above 4 queen solution.

Backtracking Algorithm: The idea is to place queens one by one in different columns, starting from the leftmost column. When we place a queen in a column, we check for clashes with already placed queens. In the current column, if we find a row for which there is no clash, we mark this row and column as part of the solution. If we do not find such a row due to clashes then we backtrack and return false.

You may refer to the article on Backtracking | Set 3 (N Queen Problem) for complete implementation of the above approach.
More Backtracking Problems: