Cassandra is a distributed database management system which is open source with wide column store, NoSQL database to handle large amount of data across many commodity servers which provides high availability with no single point of failure. It is written in Java and developed by Apache Software Foundation.

Avinash Lakshman & Prashant Malik initially developed the Cassandra at Facebook to power the Facebook inbox search feature. Facebook released Cassandra as an open source project on Google code in July 2008. In March 2009 it became an Apache Incubator project and in February 2010 it becomes a top-level project. Due to its outstanding technical features Cassandra becomes so popular. 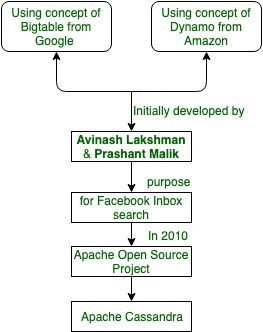 Apache Cassandra is used to manage very large amounts of structure data spread out across the world. It provides highly available service with no single point of failure. Listed below are some points of Apache Cassandra:

Cassandra implements a Dynamo-style replication model with no single point of failure but its add a more powerful “column family” data model. Cassandra is being used by some of the biggest companies such as Facebook, Twitter, Cisco, Rackspace, eBay, Netflix, and more.

The design goal of a Cassandra is to handle big data workloads across multiple nodes without any single point of failure. Cassandra has peer-to-peer distributed system across its nodes, and data is distributed among all the nodes of the cluster.