What is Algorithm | Introduction to Algorithms

What is an Algorithm? Algorithm Basics

The word Algorithm means ” A set of finite rules or instructions to be followed in calculations or other problem-solving operations ” Or ” A procedure for solving a mathematical problem in a finite number of steps that frequently involves recursive operations”.

Therefore Algorithm refers to a sequence of finite steps to solve a particular problem.

Algorithms can be simple and complex depending on what you want to achieve. 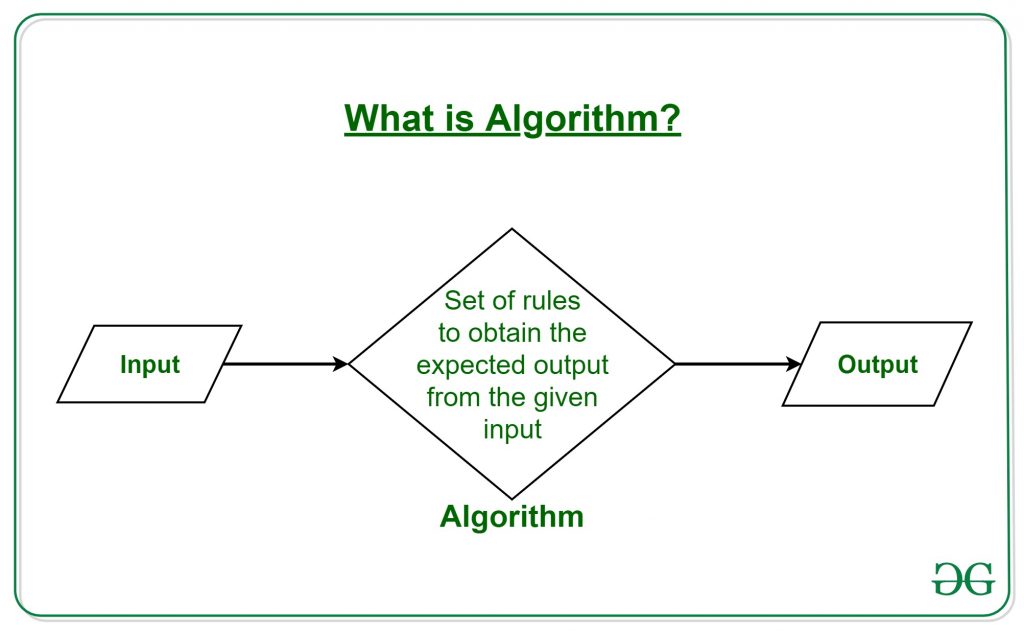 It can be understood by taking the example of cooking a new recipe. To cook a new recipe, one reads the instructions and steps and executes them one by one, in the given sequence. The result thus obtained is the new dish is cooked perfectly. Every time you use your phone, computer, laptop, or calculator you are using Algorithms. Similarly, algorithms help to do a task in programming to get the expected output.

The Algorithm designed are language-independent, i.e. they are just plain instructions that can be implemented in any language, and yet the output will be the same, as expected.

What is the need for algorithms:

1.Algorithms are necessary for solving complex problems efficiently and effectively.

2.They help to automate processes and make them more reliable, faster, and easier to perform.

3.Algorithms also enable computers to perform tasks that would be difficult or impossible for humans to do manually.

4.They are used in various fields such as mathematics, computer science, engineering, finance, and many others to optimize processes, analyze data, make predictions, and provide solutions to problems. 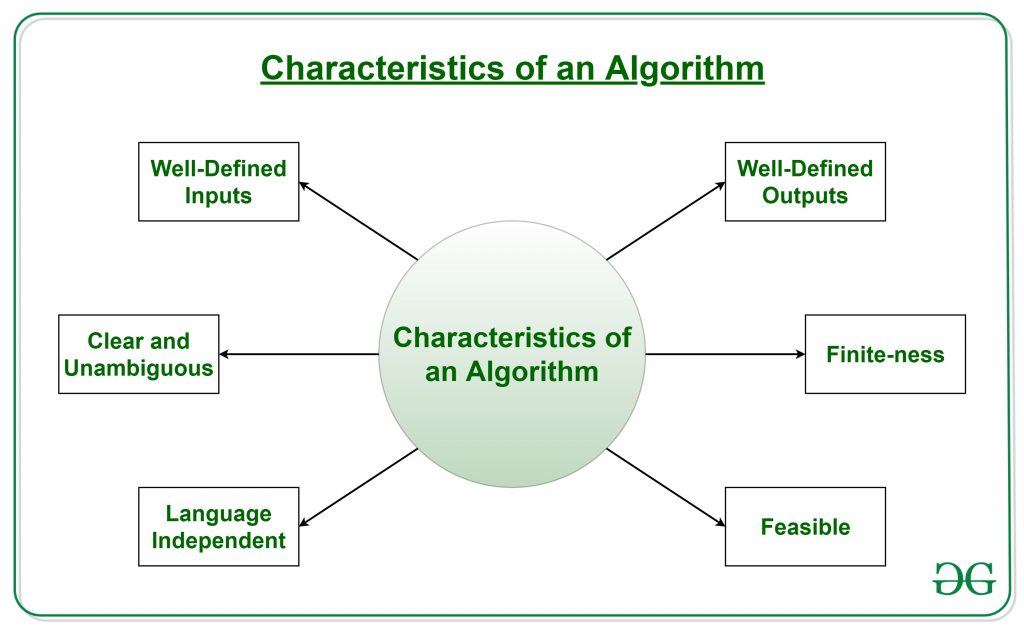 1. Brute Force Algorithm: It is the simplest approach for a problem. A brute force algorithm is the first approach that comes to finding when we see a problem.

2. Recursive Algorithm: A recursive algorithm is based on recursion. In this case, a problem is broken into several sub-parts and called the same function again and again.

4. Searching Algorithm: Searching algorithms are the ones that are used for searching elements or groups of elements from a particular data structure. They can be of different types based on their approach or the data structure in which the element should be found.

6. Hashing Algorithm: Hashing algorithms work similarly to the searching algorithm. But they contain an index with a key ID. In hashing, a key is assigned to specific data.

7. Divide and Conquer Algorithm: This algorithm breaks a problem into sub-problems, solves a single sub-problem and merges the solutions together to get the final solution. It consists of the following three steps:

9. Dynamic Programming Algorithm: This algorithm uses the concept of using the already found solution to avoid repetitive calculation of the same part of the problem. It divides the problem into smaller overlapping subproblems and solves them.

10. Randomized Algorithm: In the randomized algorithm we use a random number so it gives immediate benefit. The random number helps in deciding the expected outcome.

To learn more about the types of algorithms refer to the article about “Types of Algorithms“.

In order to write an algorithm, the following things are needed as a pre-requisite:

Then the algorithm is written with the help of the above parameters such that it solves the problem.
Example: Consider the example to add three numbers and print the sum.

Here is the step-by-step algorithm of the code:

One problem, many solutions: The solution to an algorithm can be or cannot be more than one. It means that while implementing the algorithm, there can be more than one method to implement it. For example, in the above problem to add 3 numbers, the sum can be calculated in many ways like:

How to analyze an Algorithm?

For a standard algorithm to be good, it must be efficient. Hence the efficiency of an algorithm must be checked and maintained. It can be in two stages:

What is Algorithm complexity and how to find it?

Therefore the complexity of an algorithm can be divided into two types:

1. Space Complexity: The space complexity of an algorithm refers to the amount of memory required by the algorithm to store the variables and get the result. This can be for inputs, temporary operations, or outputs.

How to calculate Space Complexity?
The space complexity of an algorithm is calculated by determining the following 2 components:

Example: Consider the below algorithm for Linear Search

Step 1: START
Step 2: Get n elements of the array in arr and the number to be searched in x
Step 3: Start from the leftmost element of arr[] and one by one compare x with each element of arr[]
Step 4: If x matches with an element, Print True.
Step 5: If x doesn’t match with any of the elements, Print False.
Step 6: END
Here, There are 2 variables arr[], and x, where the arr[] is the variable part of n elements and x is the fixed part. Hence S(P) = 1+n. So, the space complexity depends on n(number of elements). Now, space depends on data types of given variables and constant types and it will be multiplied accordingly.

2. Time Complexity: The time complexity of an algorithm refers to the amount of time that is required by the algorithm to execute and get the result. This can be for normal operations, conditional if-else statements, loop statements, etc.

How to calculate Time Complexity?
The time complexity of an algorithm is also calculated by determining the following 2 components:

Example: In the algorithm of Linear Search above, the time complexity is calculated as follows:

How to express an Algorithm?