Shortest Remaining Time First (SRTF) is the preemptive version of Shortest Job Next (SJN) algorithm, where the processor is allocated to the job closest to completion.

This algorithm requires advanced concept and knowledge of CPU time required to process the job in an interactive system, and hence can’t be implemented there. But, in a batch system where it is desirable to give preference to short jobs, SRT algorithm is used.

However, SRT involves more overheads than SJN, as the OS is required to frequently monitor the CPU time of the jobs in the READY queue and perform context switching. 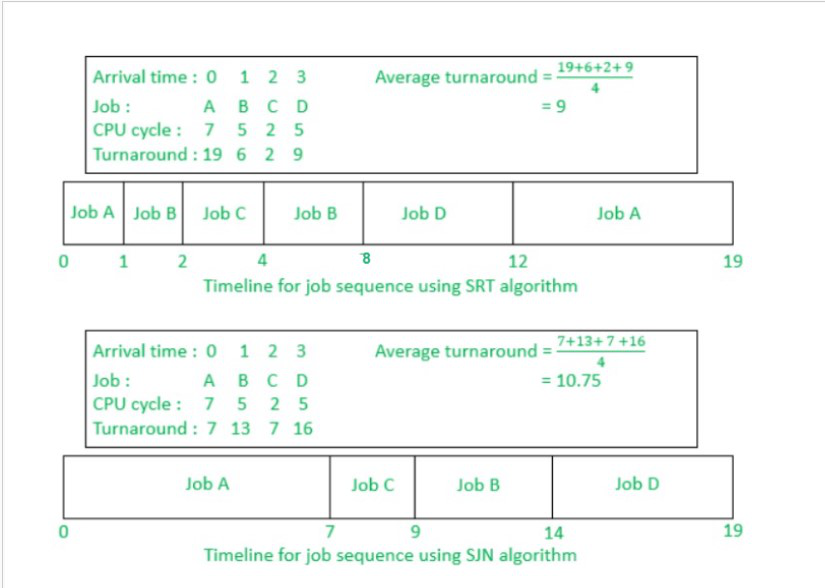 As illustrated above, for the same set of jobs, SRT algorithm is faster in execution than SJN algorithm. But, here the overhead charges, i.e., time required for context switching has been ignored. When a job is preempted, all of it’s processing information must be saved in it’s PCB for later when it is to be continued, and the contents of the PCB of the other job to which the OS is switching are loaded into the registers in the memory. This is known as Context Switching.

Advantages:
SRTF algorithm makes the processing of the jobs faster than SJN algorithm, given it’s overhead charges are not counted.

Disadvantages:
The context switch is done a lot more times in SRTF than in SJN, and consumes CPU’s valuable time for processing. This adds up to it’s processing time and diminishes it’s advantage of fast processing.