A Pushdown Automata (PDA) can be defined as :

Turnstile notation
⊢ sign is called a “turnstile notation” and represents
one move.
⊢* sign represents a sequence of moves.
Eg- (p, b, T) ⊢ (q, w, α)
This implies that while taking a transition from state p to state q, the input symbol ‘b’ is consumed, and the top of the stack ‘T’ is replaced by a new string ‘α’

Let us see how this automata works for aaabbb. 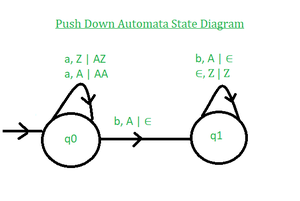 State Diagram for above Push Down Automata

Question: Which of the following pairs have DIFFERENT expressive power?

Solution : Every NFA can be converted into DFA. So, there expressive power is same. As discussed above, every NPDA can’t be converted to DPDA. So, the power of NPDA and DPDA is not the same. Hence option (B) is correct.