There are various sources of light, like candles, lamps, etc. Light bulb was invented by Thomas Edison in 1879. Light Emitting Diodes (LED), electronic electrical energy can directly convert into light energy. You can find LEDs in Cars, Bikes, Street Lights, Home Lighting, Office Lighting, Mobile Phones, Televisions and many more. Light is an energy which is released by atoms. An LED or a Light Emitting Diode is a semiconductor device that emits light due to Electroluminescence effect. An LED is basically a PN Junction Diode, which emits light when forward biased. There are various advantages of LEDs over CFL, like:

LEDs have become quite popular among a large set of people. LED consists of a PN Junction Diode and when voltage is applied to the LED, electrons and holes recombine in the PN Junction and release energy in the form of light (Photons). The electrical symbol of an LED is similar to that of a PN Junction Diode. The n-type material should be negatively charged and p-type material should be positively charged to create an LED. LED use semiconductors which emit either visible light or invisible infrared light when forward biased. Electroluminescence is a process energy is released in the form of light when free electrons in the conduction band recombine with holes in the valence band in forward bias. 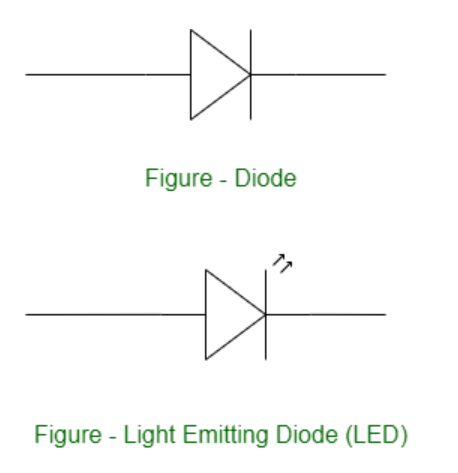 Light Emitting Diodes can be manufactured to emit all the wavelengths of visible spectrum i.e. from Red (620nm to 750nm) to blue – violet (380nm to 490nm). Light emitted by an LED is usually monochromatic that means a single color is dependent on the energy band gap of the semiconductor. Layers of LED : These are three layers in a light emitting mode (LED):

Depletion layer or region is a barrier to current. You need to apply voltage which is greater than barrier potential of this layer to overcome this barrier.