IEEE 802.15.4 is a low-cost, low-data-rate wireless access technology for devices that are operated or work on batteries. This describes how low-rate wireless personal area networks (LR-WPANs) function.

3. MAC layer: The MAC layer provides links to the PHY channel by determining that devices in the same region will share the assigned frequencies. The scheduling and routing of data packets are also managed at this layer.  The 802.15.4 MAC layer is responsible for a number of functions like:

Several established frame types are used by the MAC layer to accomplish these functions. In 802.15.4, there are four different types of MAC frames:

4. Topology: Networks based on IEEE 802.15.4 can be developed in a star, peer-to-peer, or mesh topology. Mesh networks connect a large number of nodes. This enables nodes that would otherwise be out of range to interact with each other to use intermediate nodes to relay data.

5. Security: For data security, the IEEE 802.15.4 standard employs the Advanced Encryption Standard (AES) with a 128-bit key length as the basic encryption technique. Activating such security measures for 802.15.4 significantly alters the frame format and uses a few of the payloads. The very first phase in activating AES encryption is to use the Security Enabled field in the Frame Control part of the 802.15.4 header. For safety, this field is a single bit which is assigned to 1. When this bit is set, by taking certain bytes from its Payload field, a field known as the Auxiliary Security Header is formed following the Source Address field.

6. Competitive Technologies: The IEEE 802.15.4 PHY and MAC layers serve as a basis for a variety of networking profiles that operate in different IoT access scenarios. DASH7 is a competing radio technology with distinct PHY and MAC layers.

The architecture of LR-WPAN Device: 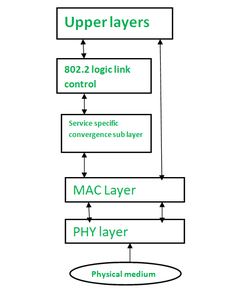